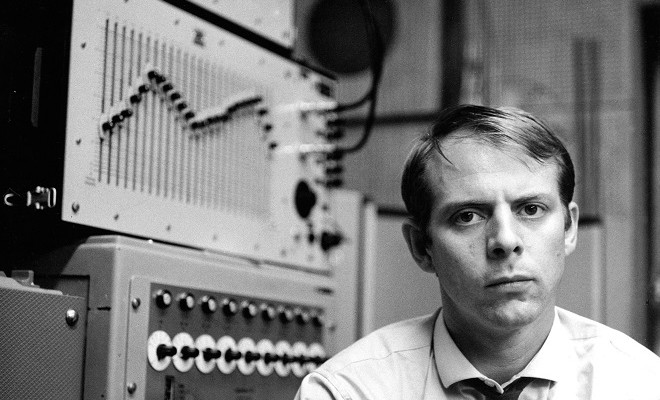 A Brief History of Electronic Music – 5 – Infinity on the Horizon

This, my friends, will be the final chapter in our odyssey through the circuits of history. It will be significantly longer than the previous ones – you can think of it as a double feature finale – but at the end we will come to a complete understanding of how the music we love came to be.

We’ve visited some of electronic music’s most essential turning points, listened to the sounds that form the roots of everything we use to make electronic music today, and encountered some of the most influential thinkers, artists and inventors that allowed it all to blossom. Now, in this last stretch towards the end, we venture home.

There’s just one last tool we need to highlight before we have all of the pieces that make up the repertoire we have today. A tool that provided the means to store these recordings and manipulate them in even more ways than had ever been available. A tool we now so heavily rely on and so heavily take for granted.

To delve into the history of computing and the ways in which it became possible for electronic music to be created through it would be to embark upon a whole other journey over the course of another set of articles. However, understanding the science of computers and how they evolved into what we have today is absolutely important; if interested, you’re encouraged to watch some documentaries about the history of computers, like this one, from the BBC.

While musicians in America, Asia and Europe were toiling away at their newfangled compositional formats in the early 1950s, Australia demonstrated to the public the first-ever computer that could play digital music. The computer was called CSIRAC, and it was the first digital computer in the country. It’s still active, too; it’s on display in the Melbourne Museum. You can hear a sample of it right here.

In 1957 at the Bell Labs building in New Jersey, an acoustic researcher named Max Mathews found a way to connect his violin to an IBM 704 computer and record some of his playing. This was the first time in history that anyone had recorded a live instrument with a computer and synthesized the clip for playback. The success of his experiment proved that computers were capable of far more than even their creators had anticipated, and would one day be capable of recording and processing audio on a much larger scale. This left Mathews flabbergasted.

Later that year Mathews would develop a sound synthesis program he called MUSIC, which allowed a user to generate and manipulate waveforms from the computer. Over the years, MUSIC became an umbrella term for a series of different programs and programming languages, all of which would make the computer more and more effective as an audio processing and generating tool.

His contributions were nothing short of genius; this is why he has come to be known as “the father of computer music.”

By 1970 the synthesizer had gone from being a hulking monstrosity to something much smaller, lighter, more useful, and more affordable. It first arrived for the public as the Minimoog, one of Moog Music’s earliest products, and was the very first portable synthesizer on the market.

However, just because it was the first didn’t mean that it would be the most successful, and in fact it appeared that the Minimoog would end up something of a commercial failure. This can partially be attributed to the fact that it was still an instrument ahead of its time, although not by much – it would be Japanese companies like Roland, Korg and Yahama that would eventually make these portable synthesizers popular among musicians, around the mid-70s.

As you can see, by this time both the computer and the synthesizer were beginning to look extremely promising in this new, dazzling world of electronic music, but there was still one problem: they could not be connected. In order to proceed, it became necessary for these devices to share digital information so that a user could manipulate sound with the synthesizer and record these manipulations into the computer, or share information across multiple synthesizers.

And from this need came an answer, an answer in four beautiful, relieving words: Musical Instrument Digital Interface…or MIDI.

MIDI was created by a Californian engineer named Dave Smith, another gifted pioneer with another astounding gift to offer this magnificent new world of electronic music. He developed it so that performance and workflow between instruments and computers would be much faster and more efficient, allowing for one synth to be controlled by another, even if it was from a different brand. He first proposed the idea to members of the Audio Engineering Society in 1981, and after some tweaks here and there, the new protocol was accepted.

To learn more about MIDI, you can check out this awesome, extremely 80s documentary.

The 80s was when all of these technologies began to intertwine and really exhibit their true potential. By this time Apple was already a highly popular company and was producing some of the most sophisticated home computer systems in the world, and it already had several programs for creating music and editing it. Other computer systems such as the Atari ST also had MIDI capability, but the software for recording and playing back music still wasn’t advanced enough to let anyone work exclusively through a computer in order to compose and edit all of their tracks. That is, it wasn’t advanced enough until 1989, when a company named Steinberg landed on the scene and blew everyone away with their revolutionary program, Cubase, which would set a standard for software of this type that would be implemented even now: the Digital Audio Workstation, or DAW.

Although Steinberg had just released the most important piece of music creation software a computer could have, they were just getting started. In 1996 they struck gold again when, for Cubase’s 3.02 release, they included something they called Virtual Studio Technology, or VST. This allowed for the use of plugins that had extra effects, and for this release Steinberg offered their own plugins that provided standard effects like a chorus filter, reverb, delay and auto-panning. In 1999 they released the 2.0 version of the VST which had MIDI support. VST technology made it so much easier for software developers to create novel ways of processing and manipulating sound, because they could work on bite-sized programs that could be used through larger, more complicated DAWs, and in so doing they could promote their brand in a completely new way.

And there you have it, my friends: we’ve come full circle. From here on out, the story pushes past the curtains of obscurity and flutters out into our common recollection.

The electronic music production landscape as we know it was a full-fledged beast by the year 2000, complete with all of the hardware and software it needed in order to provide endless possibilities for the musicians that used them. And from these possibilities bloomed genre upon genre upon subgenre upon microgenre upon entirely unique individual styles that defy categorization. As time goes by it gets harder and harder to keep up with all the styles of music that seem to pop up so frequently, and each style you know of likely has all sorts of variations creating music scenes in different parts of the world.

If you’d like to take a look at just how splintered the electronic music world has become, how many styles of music there really are out there, check out Ishkur’s Guide to Electronic Music, and prepare to have your mind blown.

So what’s next for electronic music? What innovations will provide the next stepping stones to lead us into all new territory? Well, we’re actually in the middle of major changes to music right now; having the tools to create, mix and master songs from our own bedrooms and share it with the world through the Internet has completely revolutionized the music world, and now there are bands and singers and styles of music gaining widespread exposure and acclaim that they might never have received if it weren’t for the Internet. We have smartphones and tablets that have become just as powerful as a laptop or a desktop computer, and because of this we’re no longer confined to any specific space in order to create music. We can be on a bus, on a plane, at a friend’s house or roaming the forest while we make beats.

All of the technology, all of the innovations, all of the grueling work that all of the people we’ve discussed along this series endured in order to make these things possible – we now have access to all of those things, in the palms of our hands, ready to be shared with thousands or even millions of people across the planet.

I hope you’ve all enjoyed reading these articles; I most certainly have enjoyed creating them. Electronic music is an incredible frontier that yields uncountable possibilities for the future of sonic art. Right now we might not know what the next big thing will be, but in the meantime we have so much amazing music and technology to enjoy, and it really is so much to be eternally grateful for.