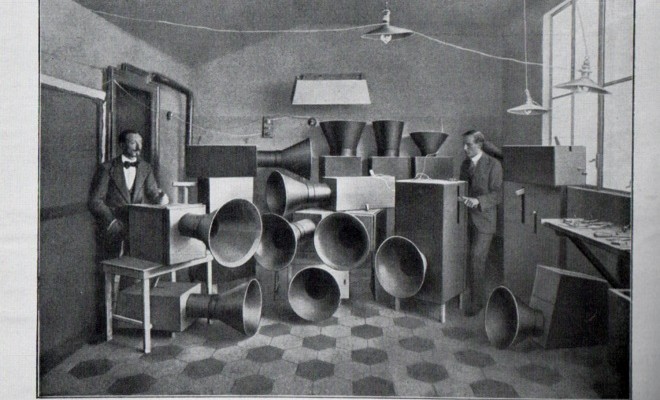 We ended part one with Thaddeus Cahill’s ingenious primitive synthesizer in 1897, and although there was a lot of ground covered before we reached that point, it is, of course, just the beginning. The bare bones of recording sound and composing music electronically were in place; the next pieces of the puzzle were the leftfield visionaries that could take these inventions and transform them from novelties into the breakthroughs that furthered electronic music’s evolution.

These visionaries were part of a movement that manifested in Italy, which would drastically and permanently change our perception of music and our approach to its creation. Here, a group of radical thinkers were beginning to define what would mark the next step in the evolution of sonic art, feeling that conventional instruments, genres and compositional techniques were becoming outmoded.

Futurism and the art of noise

The Futurist movement brought about the kind of destruction of the established, traditional approach to art that we would now associate with “punk”. Many artists, scientists and philosophers have contributed to periods of this type of shattering of antiquated dogma throughout history, and Futurism was a major iteration of that.

That kind of movement is important: it’s essential that our society periodically be told to go…fornicate itself, so it can be dismantled, broken, and restructured with new ideas.

Futurism was born in 1909 with the writings of Filippo Tommaso Marinetti, a novelist, poet and dramatist who wrote the influential “Futurist Manifesto” for Le Figaro, a French newspaper. This pompous and volatile piece of writing was a call to arms for artists of all kinds against past traditions and approaches to artistic expression, while “[exalting] energy, strength, movement, and the power of the modern machine.”

His story on its own is pretty interesting – even though he, along with other Italian Futurists, was a fascist that glorified violence and supported Mussolini – but for the sake of our journey, he plays an important role in the way music began to change.

The Futurist Manifesto inspired a lot of people to think outside the proverbial box, including the painter and composer Luigi Russolo, who took the ideas put forward by Marinetti and ran as far as he could with them. This is a guy that was so ready to do away with music as people then knew it that he wrote his own manifesto about it, called “The Art of Noises,” in which he talked about incorporating the sounds of everyday life into new forms of music.

But he didn’t just talk the talk: Russolo created his own noisemaking contraptions which he called “intonarumori”, big machines that could create all kinds of grating, screeching, howling, clanging and rumbling sounds when manually operated. You can hear one of his compositions here, and see a live performance of his work here. (There’s an introduction that explains Russolo and his intonarumori and the concert begins at around 8:54.)

By listening to Russolo’s work you will see that he was very far ahead of his time, and you will also be able to imagine why, when he performed his Futurist concerts in 1913 and 1914, many people thought he and his work were, for lack of a better term, batshit crazy. But while many people reacted with hostility, there were many others who embraced his work and understood it, including the equally innovative composer Igor Stravinsky.

It’s important to understand that Russolo’s inventions were an integral stepping stone towards the modern synthesizer; his intonarumori were capable of producing strange walls of noise – not just notes, scales and chords, like traditional instruments – and this would become part of how electronic music began to take shape, through the coupling of music played with electronic instruments and the philosophy behind the creation of noise and atmospheric texture.

As the interest in electronic instruments began to swell worldwide, so too did the response from inventors seeking to push the envelope even further.

A giant leap towards the future

St. Petersburg, Russia. 1920. A n inventor, scientist and cellist named Leon Theremin was busy working on a device that would become one of the best-known electronic instruments in history, and it was little more than an antenna and a metal loop connected to a basic console. This was known by many names, including the Thereminvox, the Etherophone, and the Thereminophone, and ultimately just as the theremin.

Theremin first created a prototype of his namesake device in 1917. After three years of fine tuning, he eventually created a production model of his instrument, and he demonstrated it to the public for the first time in 1920 at the Moscow Industrial Fair. Lenin himself was so impressed by the theremin that he asked to be given lessons on playing it.

So what is it? Well, if you’ve ever seen classic films like The Thing, The Day The Earth Stood Still or Alfred Hitchcock’s Spellbound, you’ll know the kind of sound the theremin makes: it was the iconic eerie, wobbly texture that became a staple of science fiction films in the 1950s, and is probably the first sound you hear in your head when you think of this period in cinema. Watch actual footage of Theremin demonstrating his invention here.

After being a hit in Russia, Theremin took his bizarre, futuristic creation to Europe, and then on to America, where he patented it in 1928. One of the things that made this invention so incredible then, and still so incredible to this day, is that it was and still is the only instrument that one does not physically touch in order to play it. Rather, by moving your hands into different positions around an antenna, you are able to bend the volume and the pitch of the sound.

The theremin was one of the first practical contributions to the development of electronic music in that it was small enough to fit inside someone’s home, relatively simple to learn how to use, and could contribute an expressive and intriguing sound layer to musical compositions. Many composers have written for the theremin, including Lydia Kavina, who learned to play under Theremin’s mentorship. (Watch a video of her nailing the Doctor Who theme song with a supporting band, right here.)

The theremin has endured over the decades, remembered and respected for its place in the development of electronic music and used for its signature spooky sound. Not only has it been used in many compositions for concert music and film soundtracks, it has been used in popular music for decades, and is still being used today. Jimmy Page of Led Zeppelin used the theremin for live Led Zeppelin performances, and Brian Jones of The Rolling Stones used it on their albums Between the Buttons and Their Satanic Majesties Request.

What has become more common in recent times is for musicians to create sounds that mimic the theremin with synthesizers and other equipment; an excellent example of this is in Portishead’s brooding trip-hop stunner, “Humming”.

We will end part two with the birth of this influential instrument and its place alongside the radical thinking championed by the Futurists in Europe. These were two pillars that supported the inception of electronic music, and in many ways, the ideals and approaches to music born during this time have persevered, and are what continue to make electronic music as groundbreaking and envelope-pushing as it has always been.