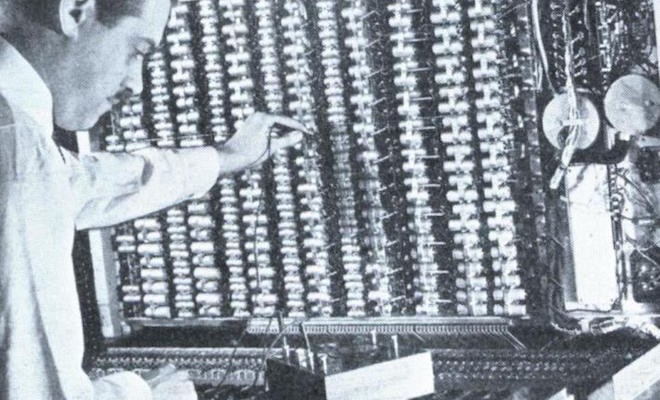 Our journey continues along the waves of astonishment and acclaim that the theremin and other instruments of the time were making around the world, as awareness of the quirky and innovative devices began to spread.

While the Roaring Twenties were in full swing and economic prosperity, jazz music, flapper girls and general debauchery were being enjoyed by many, Theremin and his peculiar instrument were quietly beginning to mark a path towards a bright future for electronic music.

This is a time when technology was undergoing some incredible changes: “talkie” films became some of the first to feature sound during the tail end of the decade, the craze for cars reached an all-time high, and electricity and the home appliances it could power were becoming a lot more commonplace. The earliest traces of much of the technology we use today became part of daily life for many during this era.

For these reasons, inventions like Theremin’s were generating a great deal of interest around the world, and had more sales potential than ever before. He granted RCA rights to mass produce his instrument, and it might have really taken off with musically-inclined consumers, were it not for the onset of the Great Depression: the devastating stock market crash of 1929.

In a stroke of incredibly bad luck, this catastrophic event occurred just before RCA distributed the theremin for sale. However, this didn’t stop the theremin from directing the course of musical evolution – and it certainly wasn’t alone.

The theremin was by no means the only electronic instrument around during the 20s; it just happened to be one of the few that managed to captivate the public. There were actually, surprisingly, quite a few electronic music instruments popping up around the world, but few could match the novelty and value of the theremin. One other instrument that managed to survive was the Ondes Martenot, invented by the French musician Maurice Martenot in 1928, and it survived mainly because gifted musicians began composing with it and clearly demonstrated its artistic potential.

The Ondes Martenot was essentially a sawtooth wave generator that was played with an innovative touch-sensitive keyboard, a special glissando-generating wire, and an assortment of buttons and switches that controlled different parameters of the sounds it produced. Over the years this design was improved upon and changed, but the way it is used has remained more or less the same.

We’ve seen how the theremin was implemented in science fiction film scores during the 50s and by popular bands and artists even in modern times, but the Ondes Martenot might have been used even more frequently in popular music than the theremin. Perhaps most notably, Jonny Greenwood of Radiohead has used it in songs on every album from Amnesiac to The King of Limbs, and the band even had 6 of them being played at once for a special live rendition of “How to Disappear Completely.”

One of the most famous modern Ondes Martenot players, Thomas Bloch, has performed live and on recordings of other big-name acts, such as Daft Punk (on their song “Touch” from Random Access Memories), Tom Waits, and with Damon Albarn (lead singer of Gorillaz and Blur) for his stage production, “Monkey: Journey to the West.”

The next major step for electronic instruments came in 1935, when Laurens Hammond and John M. Hanert collaborated on the creation of a very special organ that would give musicians new possibilities for a decent price. The Hammond organ could reproduce different timbres which allowed it to mimic the sounds of instruments like the violin, flute and oboe – and yes, it was a precursor to that Hammond organ, the one that would be widely used throughout the 60s and 70s.

Hammond and Hanert had initially wanted to sell their product to churches as a cheaper option than the pipe organ, but it was jazz musicians that ended up putting it to good use, as it was a cheaper option than having the typical big band arrangement, and it gave a single musician a lot more control over the sounds they produced.

The Hammond organ was an exceptional instrument that opened up many new possibilities, but it was the Hammond company’s next creation, the Novachord, that really raised the bar.

This was not an instrument designed with organists or pianists in mind; this was far more complex, futuristic, and experimental. Maybe, for its time, too much so. Regardless, it is widely considered the first polyphonic synthesizer ever created, and it allowed users to have more control over the sounds they produced than ever before.

The Novachord was a 72-note, 500-pound monstrosity that came equipped with oscillators, filters, voltage control amplifiers (VCAs), envelope generators and frequency dividers – all of which was far more complicated than any organist or pianist was willing to deal with. It also was the first synthesizer to feature ADSR (Attack-Delay-Sustain-Release) functionality, which is so essential for the electronic music we make and listen to today.

Because of being misunderstood and lacking in potential enthusiasts, it didn’t fare well commercially, and as the dark days of World War II began to settle in, the public’s attention had been intensely detracted. But it was still put to use by a handful of gifted composers that took the time to learn to operate it; like the theremin and the Ondes Martenot, the Novachord found its place providing creepy sounds for science fiction and horror movie scores, like It Came From Outer Space, The Beast From 20,000 Fathoms, and several Frankenstein films.

These instruments might not have received as much attention as they deserved when they first appeared, but their presence ended up having much more of an impact than their creators ever could have hoped for. We have them to thank for pushing the envelope and leading the way to the limitless possibilities of electronic sound that we now enjoy. And that warrants utmost respect.

I hope you’ve enjoyed taking this journey as much as I’ve enjoyed writing about it, thus far. We still have a ways to go.

In the next chapter, we’ll look at more of the forward-thinking (and often downright odd) composers that helped shatter musical conventions and showed the world that music was so much more malleable than they realized. We’ll also explore a revolution in sound recording that, with the help of the aforementioned composers, drastically changed the way we layer and structure songs.