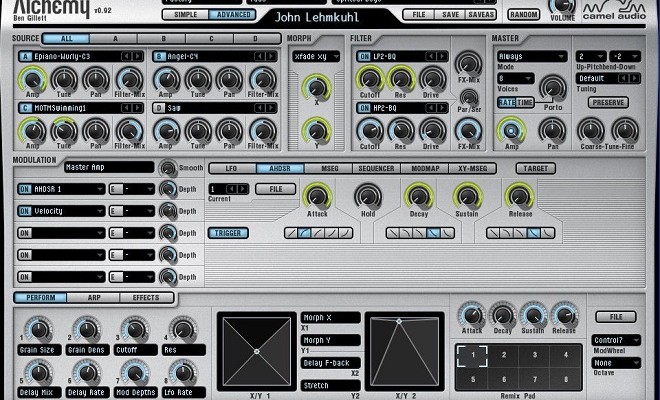 A Eulogy for Camel Audio

My fellow beatmakers, this is a sad time for our people: one of the greatest VST plugin, effects and sound bank developers in history – Camel Audio – has disintegrated.

They were one of the most widely-known and renowned companies in the vast world of electronic music, providing the VST sample manipulation titan known as Alchemy and its multitude of associated sound banks, as well as acclaimed effects plugins like Camel Phat, Camel Space and Camel Crush. Alchemy is a milestone in VST plugin development – not only for its interface and the ability to use an iOS device to control it remotely, but for the incredible versatility it provided for its users, allowing them to manipulate sound in entirely new and often otherworldly ways.

The iOS port of Alchemy, Alchemy Mobile, is one of the finest music creation apps thus far. If Camel Audio had remained whole and was able to develop it further, there’s no telling what sorts of quantum leaps they could have provided for music producers worldwide. Even so, the contributions they left in their wake will always be remembered as powerful pushes of the musical envelope, and are exemplary of what great VST plugins can be.

So why did they disband? Well, no one’s really sure, but there’s a fair chance that the extremely competitive and not-so-lucrative music creation software market had something to do with it. Camel Audio employed gifted programmers and sound designers to bring their progressive music-making vision to life, but how long can that be sustained when there isn’t a wide demographic to sell it to?

Their software wasn’t cheap, and although I don’t think the prices were altogether unreasonable, many users probably didn’t have that kind of money. When prices are high and your target demographic isn’t that affluent – and when you’re making an exclusively digital product – that’s when you start to see unprecedented levels of piracy.

That may have had something to do with it, but as I said, no one’s sure why Camel Audio disbanded as they haven’t given any further comments.

Regardless of the reason, it’s very unfortunate that they’re gone. Software companies come and go constantly, but when one of the heavyweights is forced to throw in the towel, we’re reminded of just how hard the game can be.

Adios, Camel Audio. We salute you.