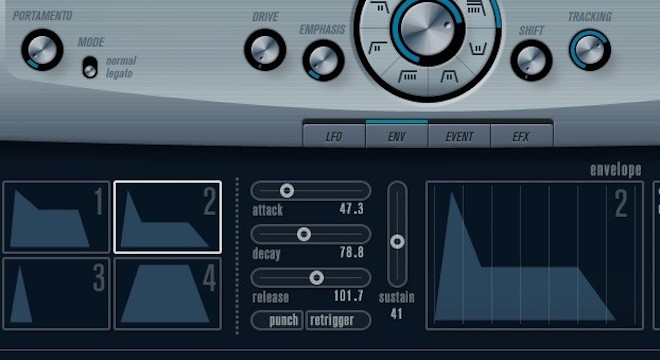 Amplitude Envelopes – Make The Synth Your Own

No matter what instrument plug-in you acquire, it’s never going to be perfect for your style of composing and mixing. You’ll achieve the most appropriate sound by getting into the settings and making each sound your own. Learn to utilize an essential part of synthesized sound design, called the amplitude envelope.

The amplitude envelope is divided into four basic parameters; Attack, Decay, Sustain and Release. Some refer to it simply as ADSR. These settings all affect what’s known as the transient, and its related parts. In technical terms, a transient is the moment when a frequency reaches peak amplitude. We know it as the sound of a note first being hit. Every instrument has a transient, even if some are more obvious than others.

ENGINEER USED QUICK ATTACK
Attack time, usually just referred to as “Attack”, is the time it takes for a frequency to reach this transient. A fast or instant Attack setting will give an abrupt, intense peak. With a slowed attack, the transient will fade in, and be less perceivable. A plucked string on a guitar has a fast attack time, meaning quick and easily noticed transient. A wind instrument, such as a flute, has a slower attack and fades gently into its transient.

On synthesized sounds, adjusting the attack isn’t just for personal preference, it has practical applications, too. For example, if you slightly delay the transient on a bass instrument, you can prevent it from interfering with your kick drum and freeing up some headroom. If you want a harsh synth to exist in the background of the mix, raising attack time will lessen the harshness of the transient.

DECAY AND DESTRUCTION
As soon as the transient is struck, it begins to fade away, or decay. The Decay time determines how long it takes for the amplitude to go from its peak to zero. The simplest example of decay is in percussion instruments. A kick drum has a practically instant decay, ending milliseconds after the transient is finished. A crash cymbal has a dramatic peak followed by a long, drawn out decay.

Reduce Decay to tighten up a sound that’s too drawn out and interfering with other sounds in your mix. If a clap or snare is trying to take over your percussion section, rather than lowering the volume fader, shortening the decay can give it a better placement without making it disappear into the mix. If a synthesized sound, such as pizzicato string section, needs to be more prominent, adjusting to a longer decay time can be a more balanced alternative to raising the level of the instrument.

SUSTAIN YOURSELF
The next parameter is very closely related to Decay, but is not quite the same thing. Normally, Decay is a measure of the amplitude going down to silence, but this changes if the Sustain level is raised from zero. This parameter indicates what level the sound will maintain at the end of the decay time. If Sustain is raised to the maximum, meaning the same level as the transient, there will be no decay and the transient will be hard to distinguish from the rest of the note. A conservative sustain level, meaning one that is set low but not at zero, will mean the decayed sound will be in a secondary role to the peak. In real world instruments, an organ has a very high sustain, that’s not much quieter than the transient. A plucked banjo has a short, quiet, and almost nonexistent sustain level.

Sustain has its own applications in mixing. You can raise your Sustain to give a synthesized sound consistency, rather than trying to mix around peaks. Alternatively, set a low Sustain if a sound needs to have prominent transients, but not disappear completely from the mix after the decay time passes. Moderate sustain level is the most natural sounding setting for most plucked string instruments, but can also be used to give an 808 Bass drum more prominence.

I NEED A RELEASE
When a note is released, either by an automated MIDI sequence or just simply taking your hand off of a key, does the note end instantly? If you’ve set your release time above zero, than no, it doesn’t. Similar to decay time, Release determines how much time passes before the amplitude goes from the sustain level to zero. It’s that last trailing sound after a sustained note is released. The difference between a long and short release is usually subtle, but still meaningful in advanced mixing or sound design.

These four settings can produce a massive variety of sounds. If the nuances are overwhelming, start from presets, and tweak each parameter as you see fit.

–Peel Back The Layers – Guidelines on layering percussion