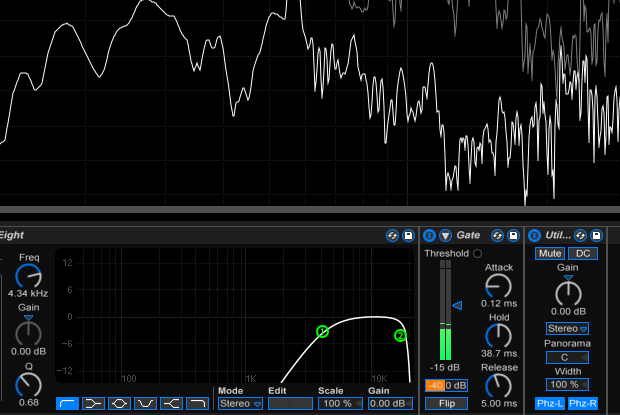 Build a Phase-Cancellation De-Esser in Ableton

Sibilance (that harsh “sss” sound) is one of the most common problems that EDM producers run into when processing recorded vocals for a track. The usual method for reducing sibilance is to selectively compress the sibilant frequencies; this is how Ableton Live’s built-in de-esser, for example, works. An alternative technique is to use phase cancellation to remove the sibilant frequencies instead. Here’s how to build a phase-cancellation de-essing effects chain in your DAW (these instructions are for Ableton, but can be easily adapted to any software).

Add an Audio Effect Rack to the audio channel containing the sibilant vocal. Create two chains inside the rack; name the first chain “Full” and the second “Sibilance.” Solo the sibilance chain; this will allow you to isolate the sibilant frequencies in the audio. Drop an EQ Eight onto the sibilance chain. If your EQ plugin is set to “High-Quality” mode, turn it back to normal quality for this rack. Set the first EQ point to highpass and the second to lowpass, then adjust the EQ so that it’s only letting the harsh sibilant frequencies through. Sibilance usually falls between 5kHz and 11kHz, but you may need to include higher frequencies, depending on the vocal.

Next, drop a gate plugin into the rack, right after the EQ. Turn the gate’s attack all the way down, and set the hold and release to a bit under the halfway point (you can adjust these later, if need be, to get a smoother sound). With the audio playing, drag the gate’s threshold slider all the way to the bottom, then slowly move it upward until the audio passing through the gate consists entirely (or almost entirely) of the sibilant “sss” sounds. Now that you’ve isolated the sibilant frequencies in their own chain, you can use phase cancellation to remove them.

Finally, drop a Utility plugin after the gate. Toggle both “Phz-L” and “Phz-R” to “on.” This inverts the phase of the audio passing through the sibilance chain, meaning that, when you play the two chains simultaneously, the sibilant frequencies in the “Full” chain will be cancelled out by the phase-inverted “Sibilance” chain. Un-solo the sibilance chain and play the vocal; adjust the gate and EQ parameters until you get a smooth, transparent-sounding de-essing effect.