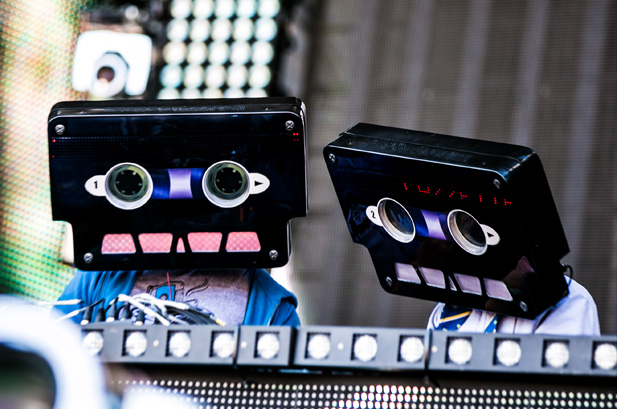 For those of you who are fans of Spotify, you’ve most likely heard the name Cazzette in the past few months. They’ve been running ads non-stop, though the song you heard to them didn’t actually resemble a good portion of their music. They’re relatively new to the game, starting their first official remixes mid last year and just now finishing off their debut, which took Spotify by storm. They had one of the more popular remixes of Avicii’s “Levels”, and did a bootleg of Swedish House Mafia’s “Save The World” well enough that they accepted it as an official remix. So they started it all off already hitting well with the top artists out there.

But apparently Cazzette had more tricks up their sleeves. The popularity of their many following remixes secured them a 17-gig tour starting in September around the USA, before they had even had a full album out. Then when their debut came, they made an even bigger splash by deciding to release exclusively through streaming services (they were the absolute first major debut to do this). With Spotify as the main source for finding their three EP debut, Eject, it makes sense that they pretty much took it over the advertisement there. Despite just debuting (The final part just came out), they’ve already accomplished being one of the most popular artists to hit Spotify, and it’s easy to see why.

Their style is one of the catchiest I’ve heard in a long time. They call it Dub House, and it speaks for itself. Powerful kick, amazing buildups, smooth melodies, and – on the tracks that have them – powerful drops. It’s the type of song you can relax to for a while, and then all of a sudden you’re blown away and snap out of it. Their most popular song, and the one Spotify users are used to hearing via ad, is titled Beam Me Up. It’s got the smooth, beautiful vocals that you seem to see captured so well in much electronic music, but underneath that is actually a powerful track that you wouldn’t have imagined from the advertisements alone.

Another song I find worth noting is titled The Rat, despite it not quite hitting their top tracks. Those more accustomed to heavy songs and looking for one among Cazzette’s will find themselves at home with this. It’s got a deep, fast-paced drop that doesn’t quite face melt, but does give off some amazing energy. It follows this up with a second drop similar to the first, but slower and glitchier to the point where you can imagine a dance floor reacting to the sound.

The second EP of the debut only held three songs, and while I enjoyed them and the great vocals on two of them, I don’t quite find them unique from the others enough to earn their own article sections. However, on the third EP, some more attention is drawn from the start. It opens with the track Downfall, the type of song you could imagine being in a video game if they had enough a budget and an above average love for bass. It’s smooth, it’s calming, and it’s a perfect example of the combination of Dubstep and House that Cazzete specializes in.

Cazzette is doing everything right to give themselves a shot at being one of the biggest electronic artists in all of 2013. Their exclusivity to Spotify was certainly a large enough stunt to draw them some massive attention, but I can easily see their next album being across everything from Spotify to iTunes to Beatport, and them hitting the charts shortly afterwards. Their unique sound has forced them from the crowd, and everyone seems to love it.