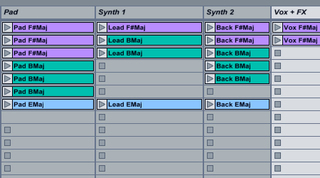 Moving electronic music into a live context can be difficult: the linear, precise nature of studio production is often at odds with the spontaneity that makes for a great live show. Here’s a system that allows you to bring some improvisation to a live set, without running the risk of a train wreck.

Divide each song that you want to play live into its component parts. I separate my tracks into a maximum of eight channels: acoustic instruments (guitars, pianos, and so on), pad synths, lead synths, secondary synths, vocals, bass, drums, and percussion. Depending on your style, you may want to do it differently: some performers separate the kick, snare, and hi-hats into their own channels, for example. Crop out three or four eight-bar loops for each instrument, then bounce the loops to audio files. Before you close the song, make a note of its musical key and tempo.

Next, import and organize the clips in your live performance set. Open your live PA set (or create a new one), then create a new audio channel for each musical element (one for bass, one for drums, etc.). Drag and drop the clips into the set, then rename them according to instrument and key. If the song is in G Major, for example, you’d rename the lead synth clips to “Lead GMaj.” If your DAW allows you to change the color of clips, pick one color for each key: for example, you could set the color of all clips in G Major to green. Set the clips to loop, then move them into their corresponding instrument channels. Save your set, then open the next song that you want to include in your live performance. Separate the song into elements, then import and organize them in your live performance set; repeat the process for every song that you want to use in your live show. When you’ve finished with all the songs, organize the clips by key (this is where the color-coding comes in handy).

Now that the hard work is done, you’re ready to play a live set. Just trigger any clips that you want to, as long as they’re in the same key. This approach allows you to improvise during your set without worrying about clashing keys. If your clips have different tempos, configure your DAW to warp them to the master tempo: now you can speed up or slow down the performance at will. Add effects to each channel, hook up a MIDI controller, and rock out!