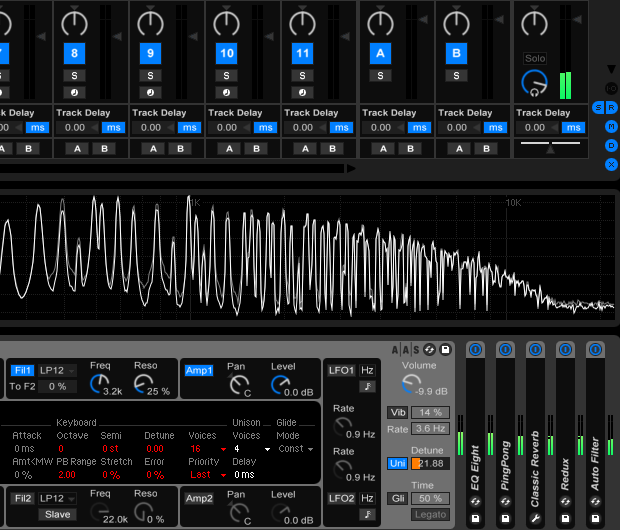 Pad synths are a subtle but important element of trance, house, drum ‘n’ bass, and downtempo tracks. Sitting in the back of the mix, they create progressions that the lead and bass synths can then play off of, and add sonic depth and texture to the production. Here’s a quick look at how to begin creating your own pad synths in a DAW; as always, take these steps as a starting point for building your own sound rather than as a strict set of rules.

Start with a pair of saw wave oscillators. Set the second oscillator’s “Semitones” control to +7 (this interval — a perfect fifth — appears in both major and minor chords, so it’ll sound concordant no matter what you’re playing). For extra richness, use the fine detune controls to tune the first oscillator down by a few cents and the second oscillator up by the same amount. Set the synth’s amplitude envelope to a slow attack, full sustain, and moderate-to-long release; this creates a sound that slowly swells up and gradually fades away. Use a low-pass filter with a touch of resonance to filter out the bright high-frequency sounds from the pad. Set the number of voices on your synth to at least eight; if the synth has a unison detune control, turn it up slightly.

Because pad synths play long, drawn-out notes (usually one bar long at the absolute least), modulating them with LFOs and envelopes is key to keeping them interesting. For the LFOs, use slow rates and gentle depths; try modulating the filter resonance with a sine-wave LFO, then use a second sine-wave LFO set to a different rate to modulate the amplitude of one of the oscillators. Set up a mod envelope with a moderate attack and decay, and zero sustain and release, then send it to the amplitude control of a white noise oscillator to add a subtle brush of noise at the beginning of each pad note. Try using an LFO on the pitch to add a tiny bit of vibrato to the pad synth.

Pads are generally used as background sounds, so they shouldn’t usually take up much frequency space in the mix. Drop an equalizer or filter onto your pad channel, then use it to cut out everything below 250 Hz (or higher, depending on the mix). If the pad’s still too obtrusive, cut out some of the high end as well. Next, use a moderate amount of reverb and delay to smooth out the pad; a ping-pong or stereo delay here gives some nice movement to the sound. Finally, if your synth pad is sounding too cold and “digital,” try using a small amount of bit reduction to add warmth.

James P is the creator of Producer Tools, the ultimate mobile app for electronic music makers. Read more of his tutorials at Quadrophone.com.