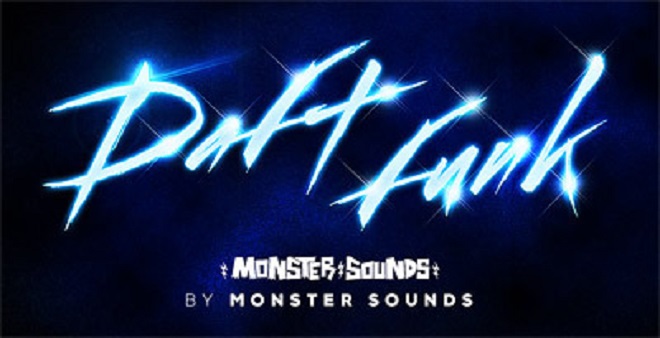 The new Loopmasters “Daft Funk” sound pack is huge — over a gig of funky basses, chunky drums, and filtered synth loops. There some duplication, of course — the pack includes the usual Loopmaster array of REX files and sampler patches — but the WAV files alone weigh in at almost 800 megs of audio.

If you had any doubts about how French-housey a collection named Daft Funk would be, there’s an entire folder called “Filter Loops” to answer your question. They mainly stick to the tried-and-true f iltered funk guitar sound, with a couple more glitchy and atmospheric loops tossed in for variety. The lead synth loops are more varied, rawer, and more modern-sounding: the selection includes some trancey supersaw leads and plucks, raspy electrohouse-style synths, and even a couple of thinly disguised ‘yoy’ basses. The riffs are straightforward and dancefloor-friendy, and everything has a nice, clear timbre. One slight downside is that quite a few of the lead synth loops are pre-sidechain-compressed, making them a little less usable if you’re not working with straight-ahead four-to-the-floor drums.

The bass loops, too, are divided between classic French house sounds and more modern styles. The “Bass Funk” section is deep, twangy, and funky; if “Homework” is what you’re going for, this is the sample folder for you. The “Bass Synths,” on the other hand, are big, dirty, and harsh (and again, often pre-sidechained); if you’re more into the Ed Banger sound, these are what you want. Rounding off the synth loops, there’s a small collection of glitched-up vocal loops — very nice for adding that little extra touch to a beat. Without exception, all of the loops in the pack chug along at 126 beats per minute; it’s a great tempo for house, to be sure, but if you want to work with faster or slower rhythms, be aware that you’ll need to do some warping.

Moving to the single hits, Loopmasters have again included a vast variety of sounds, in both the classic and modern French house styles. Like the loops section, the single hits are pretty evenly divided between the two sides of the French house divide: there’s a “Bass Guitar” folder full of down-low funky plucks and slides, as well as a plain “Bass” grouping with abrasive saw-wave synths (and a few deeper, more subtle sounds). The “Funk Stabs” collection has that classy, tasteful disco vibe, while the “Synth Stabs” are shrill, piercing, and full of wobbly modulations. There’s a modest set of FX samples too, which have some creative modulations beyond the normal sweep and rise.

The multi-samples in Loopmasters’ “Daft Funk” pack really shine: each bass multi-sample has at least two octaves of deep, solid samples in it, making it a breeze to put together natural-sounding instruments. The “Keys” multi-samples (which could just as easily have been called “Leads”) have an even wider octave spread; they’re definitely weighted more toward the electro-house side of things. Some of these sample have built-in modulations, which can be out-of-time depending on the tempo, pitch, and sampler you’re using, so some adjustments might be necessary.

Finally, the drums. The kick single-hits are the highlight here: they’re tough, chunky, and solid, and should find a home in any producer’s drum rack. The claps and snares are a bit thinner and weaker; you’ll definitely need to layer in some thicker samples if you’re looking for a big snare sound. The hats are mostly crisp, and there’s a set of little glitchy percussion samples to fill in the corners of your drum pattern.

The drum loops are built on top of those same awesomely chunky kicks from the single-hit section. The pack includes a mix of straight-ahead house and more broken beats; in addition to the full beats, there’s a set of hi-hat-heavy top loops for filling out the mix, and few glitch percussion fills to add some interest. You could easily use any of the beats as-is, or process, mix, and layer them to make them your own.

If you produce any type of French house (and maybe even if you don’t), “Daft Funk” is definitely worth checking out. The sheer amount of audio should last you through many, many tracks, and the price is totally reasonable given what’s included. “Daft Funk” is out now on Loopmasters; it’s available from their website.