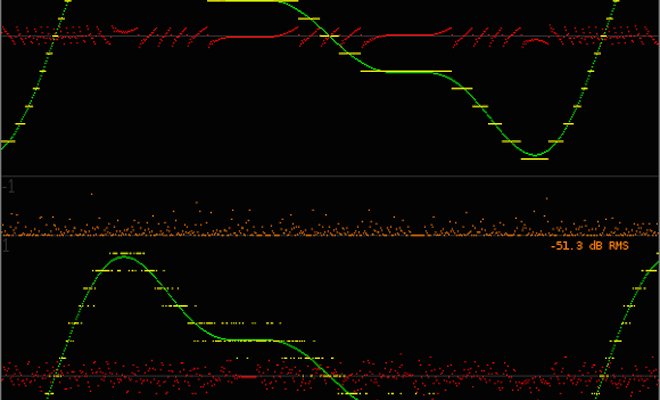 Dithering: An Important Tool for Mastering

For well over 20 years, the consumer standard for digital audio quality hasn’t changed. Since the early 1980s, back when compact discs were first made available to the public, 16-bit 44.1 Khz audio has been the accepted quality. Even so, most of us record and mix at 24 bits or higher. When all is said and done, however, everything needs to be cut down to CD quality. As you might expect, cutting out 8 bits affects the sound in ways that we don’t like. Thankfully, there are ways to fight off the effects of reducing bit-depth, and one of them is dithering.

WHAT IT IS
When you’re creating a mix at 24 or 32 bits, you’ve got a wider dynamic range (how loud or how quiet a sound can be) and greater clarity than if your project was done at the CD quality standard of 16 bits. The problem is that when you render higher bit-depth project down to CD quality, those extra 8 or 16 bits can’t be miraculously shoved into a 16-bit .wav file. Your system has no choice to cut out, or truncate, the least significant bits. This can cause very unpleasant distortion on some of the quieter sounds, and completely eliminate others. Dithering adds a layer of low-level random white noise, which affects the numbers just enough to either bring back some of those lost sounds, and replace the unpleasant distortion with a random and unperceived white noise. This does not completely negate the effects of reducing bit-depth, but it helps a lot. It’s one of those things that are simple, but genius.

Not all dither is created equal. Some dithering plug-ins will apply a flat, basic white noise across the entire frequency spectrum. Other plug-ins will have options for noise-shaping, meaning the noise will be more prominent in certain frequencies. Noise-shaping might be used to make the noise most prominent at higher frequencies where the human ear is less sensitive, or simply to fit a particular mix better. Some curves are simple, others will have specific cuts at many different frequencies. The choice comes down to personal preference.

WHEN TO USE IT
If you’re going to apply dither, be sure to only apply it once, at the very end of production. Only when a mix is ready to be rendered down and distributed should it be applied. One layer of white noise usually can’t be perceived, and is ultimately helpful. Two layers are likely to be audible by listeners, defeating the purpose of trying to reduce perceived distortion. Some software will apply dither when mixing down by default, so it’s important to understand your own workstation’s settings. There are plug-ins designed for mastering that include dither, so care should be taken to not layer two of these on the same mix.

Because dither is designed to counter the effect of reducing bit-depth, common sense would assume that there’s really no point in using it if the tracks in your project were already set at 16 bits. Despite this, a few engineers say that dither is useful even for a 16-bit to 16-bit rendering. Some say that the light layer of white noise can help bring out the subtleties in a mix. Others claim that because a computer will use 24, 32, or 64 bit processing to arrive at a 16-bit final product, dithering should be applied even if the bit-depth isn’t being reduced. The debate goes on, and these engineers usually admit that it comes down to personal preference.

WHEN NOT TO USE IT
Because there should only be one layer applied, you shouldn’t bother with using it at all if your mixdown is going to be sent to a mastering engineer or agency. As mentioned before, not all dither is created equal, and an experienced mastering engineer will have far more advanced tools at his disposal. If you’re unsure if your mix will ever be professionally mastered, it’s wise to make a back-up of your mixdown without dither.

Keep in mind that a single plug-in, no matter how advanced, will not save a poor mix. When going from a higher, production quality bit-depth down to a consumer level quality, dither will replace harmonic distortion with tolerable random white noise, and help preserve the subtle effects and sounds that can get lost.