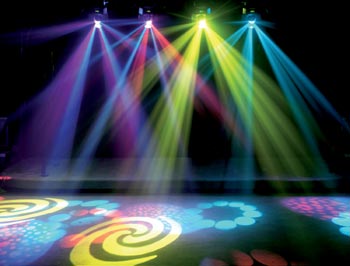 Up until recently the pricing and quality of LED lighting made it either too expensive or not effective enough to be used for DJ lighting. 250 Watt halogen scanners and gobo moonflower lights were the norm for any DJ needing to project light onto his/her dance floor alongside a laser and a smoke machine. Not only were these lights power hungry, they were also heavy and got very hot meaning you had to wait for them to cool down before packing them away.

Since manufacturing in China has brought consumer electronics pricing down, a new wave of effects lights has hit the dance floor in the form of LED lighting. You no doubt will have seen uplighters (the coloured effects projected onto walls and curtains in venues) and LED strip lights that colour change making every high street bar ‘glow’ in colour. LED effect lights for DJ’s have appeared in much the same form as their earlier models but now run more efficient, have next to no heat, weigh less and have a lifespan of around 100,000 hours meaning that you’ll never have to change a lamp in a light again!

LED light effects have different power outputs too. The higher the wattage of the LED, the brighter it will be. Early lights used clusters of 1 Watt LED’s whereas newer systems use fewer LED’s rated at 3 or 10 Watt. This difference in output makes them more than capable of outperforming halogen systems in brightness and effectiveness.

You can now pick up LED lights from as low as £30 but there are still some awesome systems that use moving head scanners that can sell for as much as £600. Brands such as Prolight, LEDJ, American DJ, Kam and Soundlab provide the best value.