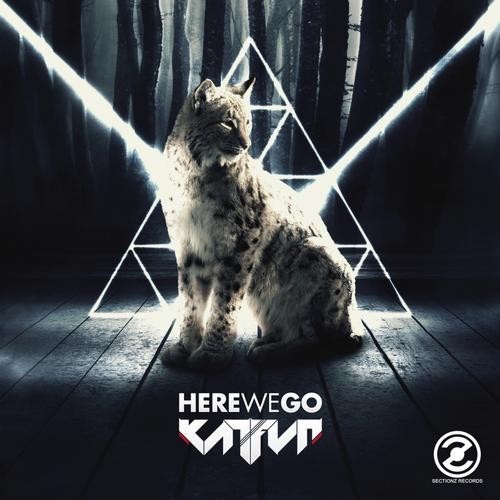 When applying for a job as some form of artist, you’d bring a portfolio. You don’t give your prospective employer an in-depth tour of every project, you showcase just enough to let him know what you’re capable of. Katfyr is applying to be your go-to guy for melodic bass music with his solo EP, Here We Go.

Katfyr (pronounced “cat-fire”, not “cat-fur”) isn’t a complete newcomer to the scene. He’s been making a name for himself mostly through well-received remixes of material from his peers in the EDM world, and Top 40 hits. His name is on remixes of songs by Katy Perry, Psy (of Gangnam Style infamy), and Celldweller, to name just a few. This cat understands that first impressions are everything, and has crafted a no-frills EP to show off what he can do as a producer of original mixes.

The EP (released on SectionZ Records), is short, but solid. If you’re expecting an epic musical journey through Dubstep, you’ll be disappointed. If you approach this more like a roller coaster, exciting but brief, you’re likely to get just that. The tracks feel very driving, are a lot of fun and, for the majority of the time, are pretty frenetic. They’re still tied down well enough that a person who isn’t a die-hard bass head can still get down with them. That said, this is still Dubstep, and anyone who is turned off by that isn’t going to converted by Here We Go.

As a whole, this pack of three songs is kind of hard to summarize. Each track is unique and stands well on its own; this could easily be mistaken for a compilation of three separate producers. You’ll be treated to a compelling invitation to get on the floor, a nostalgia trip, and a moment to just sit and let emotions happen. It’s somewhat bittersweet, as the variety is cool, but you may end up feeling like one musical experience ends too quickly before switching to another one.

On the composition side, Here We Go is strong. There’s an excellent balance of harsh noises and pleasant melodies, and neither side of the spectrum interferes with the other. The noise does a good job of playing off the melody, and vice versa. Not to say that there aren’t times with an emphasis on one or the other, but overall the EP stays balanced. The beats tying all the synths together also impress, despite their simplicity. The kick/snare sequences aren’t what most would call complicated, but what they lack in variety they make up for in power. The simple beats do get changed up often enough that most won’t perceive them as repetitive.

Things get pretty chaotic on the production side. There’s a lot of sounds all trying very hard to be heard at once, and the skillful layering makes this thing feel awfully loud. Even if you aren’t pushing your sound system, the feeling of intensity is very present throughout the running time. A possible downside is that, despite the powerful feel, the drops lack anticipation and excitement. The constant focus on playing so many layers all the time takes away from the contrast of any of the build-ups. On the flip side, this attribute does make the tracks a bit better suited to the dance floor, where an overly lengthy build-up can take away from the average dancer’s flow.

On the whole, Here We Go doesn’t produce much that electronic fans don’t already know, but it’s still a solid package. Like a well-designed roller coaster, its biggest flaw is probably the feeling of “oh, it’s over already?” punctuating not only the 13 minute EP, but the individual tracks. It’ll drive a dance party, especially if the guests are fans of Dubstep, but it won’t drive it for very long.

This EP is currently available on Beatport and on SectionZ Records’ Bandcamp page. The price between the two doesn’t appear much different at first, but Beatport will charge you extra if you want an uncompressed .wav or .aiff file. The best deal for most audiophiles and DJs with discerning clients is to buy the slightly compressed FLAC version off of Bandcamp. If an MP3 version is just fine for your ears, Amazon will only charge you about $3 for download only. This EP is not available as a CD or vinyl at the time this was written.