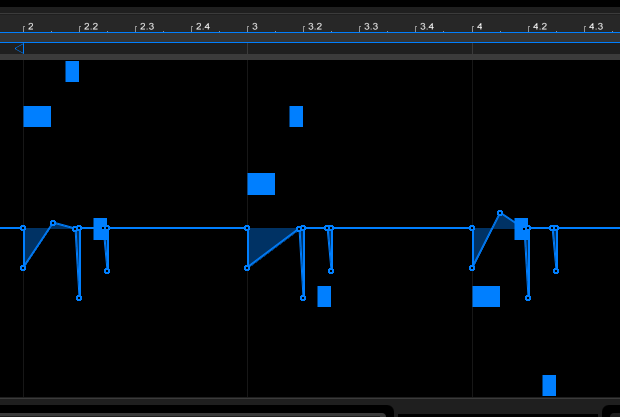 After you’ve spent hours designing a massive bass synth patch, it’s tempting to compose the track so that the bassline’s front and center, all the time. The most powerful basslines, however, draw a large amount of their impact from their contrast with the other elements in the track. To hear this effect in action, stop your bassline right before a snare drum hits, then bring it back in when the snare’s finished playing. Leaving negative sonic space like this emphasizes the contrast between the low-pitched bass and the higher-pitched snare, and makes the bass (and the snare) much more impactful than if they were played simultaneously.

If your bassline and lead synth are sounding flat, musically speaking, try mirroring the lead synth’s movement with the bassline instead of following it. For example, if your lead synth is playing C4 – G3 – D#3 – F3, its pattern of movement is Root – Down – Down – Up. To create a mirror of that movement in the bassline, then, you’d follow this pattern: Root – Up – Up – Down, or C1 – D#1 – G1 – F1. If the bass notes in this type of pattern start getting too high or too low to sound good, try just moving the out-of-range notes up or down an octave to bring them back into line.

When it’s overused, pitch bend can sound cheesy and over-the-top. Some subtle pitch bending, on the other hand, adds a feeling of motion and fluidity to an EDM bassline. Try adding a short, downward pitch bend — less than 1/16th note long — at the end of each individual note in your bassline to create a sense of downwards movement and depth, or gently raising the pitch across the entire length of a note to give the bass more of a surging feeling.

Bringing ‘unexpected’ note durations into your composition keeps the listener engaged, and can help to signal the ends of musical phrases. To get a sense of how this works, start with a simple off-beat eighth-note bassline, repeating a single note four times. Shorten the last note of the bar to a 16th note, then add a second 16th note, five semitones lower, right after it. Add a second 16th note right in front of the third eighth note, maybe two semitones down. Play back your bassline to hear how much life the extra short notes add to it, then try adding in some more shorter notes around the longer ones — 1/32nd notes, or even triplets.

Move Riffs by Thirds and Fifths

Moving an entire bass riff up or down by thirds and fifths quickly adds great-sounding variation to your bassline. Sticking with the example key of C Minor, write a simple three-note riff consisting of C1 – D#1 – G0. Select all three notes, duplicate them, and move the first note in the duplicated set up by a minor third to D#1 (bring the resulting F#1 down to an F to stay in key). Duplicate the entire phrase, then select the last three notes and bring the first note up by a perfect fifth to G1 (pull the resulting D1 up to a D#). If this is getting too high-pitched, drop the last three notes down an octave.