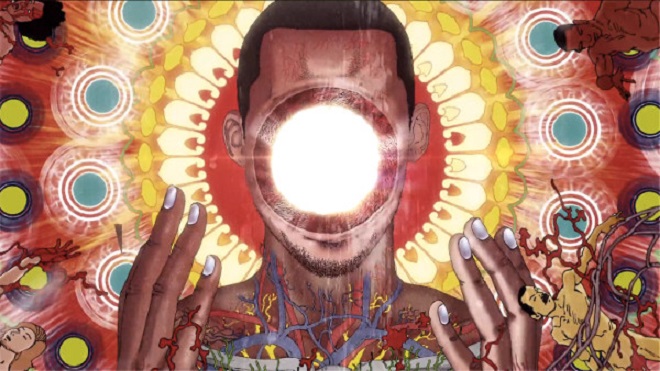 With You’re Dead!, LA-based producer, musician and rapper extraordinaire Flying Lotus (real name Steven Ellison) has taken his trademark style of dreamy, quirky soundscapes and expanded upon it in a stunning way, offering some of the best organic instrumentation and layered atmospheres he’s ever put together. Accompanied by a cast of instrumentalists, singers and rappers, he has stitched together 19 tracks that come together to form one beautiful, shimmering journey. And quite honestly, it’s nothing short of gorgeous.

Flying Lotus has been a major name in the alternative hip hop scene for some time, ever since his first full-length release, 1983, which hit the streets back in 2006. Since then, his work has gradually been turning more and more heads, due to his very liberal and interesting approach to fusing hip hop, electronic music and jazz. He made a break into television when his music was picked up for bumper segments on Adult Swim, Cartoon Network’s block for animated shows meant for older audiences.

Ellison has worked with some big names in the industry, such as Erykah Badu, Jonathan Greenwood and Thom Yorke of Radiohead, and Gonjasufi, and on You’re Dead! that tradition continues: Kendrick Lamar, Snoop Dogg, Angel Deradoorian (formerly of Dirty Projectors), jazz/bebop/funk legend Herbie Hancock, and the one and only Ennio Morricone (the composer behind the music of many Spaghetti Westerns like The Good, The Bad and The Ugly) all appear throughout the tracklist. Fellow musician Thundercat has also been a consistent collaborator on his albums, and on this one he appears playing bass and singing on many of the shards of this colorful sonic dream.

There are more vocal features on this album than on any of his others, and they are key elements that Flying Lotus uses to embellish his psychedelic escapades, whether serving as front-and-center features or as reverb- and echo-heavy extra dimensions. Even his animated oddball alter-ego Captain Murphy appears on several tracks, a character we remember from his awesomely surreal debut mixtape, Duality, dropped back in 2012.

Whereas Flying Lotus’ previous album, Until the Quiet Comes, had more of an ambient vibe to it, this new one features more energetic textures – frantic saxophones warbling and fluttering over complex live drumming arrangements, noodling bass and distorted guitar leads, organs and pads and synth textures drifting from background texture to prominent focal points – which all converge in a magnificent unity of organic musicianship and electronic ear candy.

Each album Flying Lotus releases seems to have a specific theme in mind, from the year of his birth on 1983 to the city he grew up in on Los Angeles, the sheer magnificence of the universe on Cosmogramma and the cryptic world of dreams on Until the Quiet Comes. On this one, the theme is death: but it’s not explored in a dark or morbid way, rather as just one more mysterious chapter along the constant path on which existence and matter transform and progress. The album plays like a jazzy soundtrack to a person’s passing, accompanying them as they drift out of their bodies and into the vast unknown. It’s a bold theme that, I feel, is exquisitely brought to life in this collection.

One of the great things about this record is that each song flows seamlessly into the next, which makes the entire album feel like one long song. The fact that the songs range from 30 seconds to 4 minutes in length also account for that sensation of seamlessness, since it’s hard to determine where one song ends and another begins if you aren’t looking at the tracklist while listening.

It’s also hard to pick out single songs to talk about in detail, because really, it’s all of them that provide something interesting to explore, and it definitely takes several listens to pick up on all the subtle nuances and lurking textures dotted throughout this sonorous expanse. However, there are some specific highlights for me. “Never Catch Me,” featuring Kendrick Lamar, is a great track, what could be seen as the “single” of the album, especially since the first music video for this album was to that song. Kendrick drops an excellent verse that echoes the theme of the record in his signature rapid-fire rhythmic delivery. “Dead Man’s Tetris” sounds like it could’ve fit right in on Captain Murphy’s Duality, who appears rapping, alongside Snoop Dogg. Snoop’s verse is pretty simple but it works just fine here. “Coronus, the Terminator” has a neo-soul type vibe that I love – this is definitely one of my favorite songs on the album – which sounds like something Erykah Badu would sing over. “Turtles” is also a stand-out track for me, as is “Ready Err Not,” although it says that Ennio Morricone contributed to it and it doesn’t seem like he contributed much, which is a bit disappointing. If he’d made something more complex with Flying Lotus it probably would’ve been amazing.

My only criticism for this album is that the songs at times feel a bit too short, particularly when listened to on their own. When you don’t listen to the rest of the album accompanying the track, many of them seem like brilliant little ideas that weren’t expanded upon to their full potential. However, if you listen to Flying Lotus’ previous albums, you’ll notice that he does that quite a bit, and that the constantly-shifting atmospheres is just a part of what makes him such a unique producer. I suppose I only wish these tracks were longer because I’m just enamored with what Flying Lotus has created here, and would welcome entire hours of additional material if he were to provide it.

Overall I think this is easily his most powerful and adventurous release to date. It shows his style and skill maturing greatly and clearly proves that he will go down in history as one of hip hop’s most original and creative contributors.