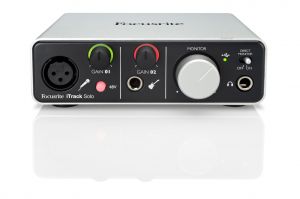 Focusrite has released iTrack Solo for iPad as well as for Mac and PC.

iTrack Solo is a dual-input audio interface designed for recording instruments and vocals, bringing Focusrite versatility and sound quality to the world of iPad audio recording. iTrack Solo is designed to be a companion for any singer/songwriter wanting to take their demos to the next level. The interface is compatible with GarageBand and other popular recording apps, and it can be used on a Mac or PC with up to 24- bit/96kHz digital performance.

iTrack Solo features a professional, low-distortion, low-noise Focusrite microphone preamp as used in Focusrite’s flagship Liquid Saffire 56 interface. Phantom power allows the use of top-quality studio microphones, and alongside the microphone input on the front panel there’s an instrument input that is designed for guitar and bass.

A supplied cable connects iTrack Solo to the iPad, powered by the included USB cable that delivers the power necessary to run the iTrack’s high-specification components. There is also a pair of phono connectors on the rear panel for connecting an audio system for playback.