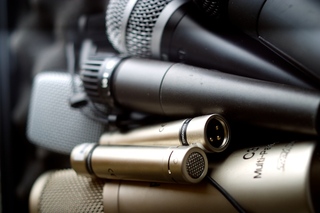 Giving Vocals Character: The Preacher and The Protester

The human voice is the most common tool for communicating the story and the setting of a song. Every aspect of voice, from the lyrics to the emotion of the performer lets a listener know what should be known and felt. The job of the Producer is to bring that essential piece into the spotlight, and enhance the performer’s ability to convey a message.

In recorded music, we not only control what is said, we control how it sounds. This article will go over two voice characterizations that tell the listener not only who he’s listening to, but where and why he’s listening to them. The archetypes have been used in countless recordings over the years. Now you’ll know how to reproduce them.

These days, when people think of a man of the cloth, they don’t imagine a man in robes in a stone cathedral. Most of us today imagine a clean-cut gentleman in business casual or possibly a suit and tie. We don’t envision someone chanting in Latin to a somber congregation, we see someone passionately proclaiming his faith to a cheering crowd. This shift of stereotype means that a simple “church reverb” preset just won’t cut it, unless you want a gothic, antiquated sound.

The first step to emulating modern preachers isn’t reverb, it’s compression. If you listen closely to a religious radio station, you’ll notice that a sermon can go from nearly a whisper to a full-blown shout without ever getting quieter or louder. The preacher wants to speak with maximum passion, while still being listenable to anyone from babies to the elderly. If you’re normally a conservative with your compression, this is the time to get liberal.

On your compression settings, set your ratio anywhere from 2:1 to as high as Infinity:1, if your ratio goes that high. If you normally raise the attack slightly to compensate for the sound breathing before speaking, consider dropping the attack and allowing the breathing to be accentuated. This can add an extra layer of emotion, if done carefully. Experiment with lowering the threshold and raising the output until you get what you want.

Now, we get to that reverb. It should sound “spatial”, but not to the point where reverberations are all anyone can think about while listening. If your reverb effect has frequency settings, focus more on adding reverb to the low to low-mid range frequencies. It’s recommended to use the compression first in your effect chain, then reverb.

When you want to get political, the bullhorn effect is a tried and true method for getting people to listen. A quick shift in tone can get the attention of someone who is starting to tune out your mix, and a megaphone is associated with important messages by important people. At live shows, many vocalists have simply brought a megaphone in front of a microphone. It makes for nice theatrics at a concert, but makes for an unpredictable and ultimately poor recording. It’s more practical to simulate the effect, with settings that are a touch more specific than the preacher.

Just like the preacher, the sound of the protester starts with the compressor. A bullhorn is designed to amplify a voice at a consistent decibel level, so compression isn’t just permissible, it’s necessary. Once that’s done, use an equalizer to narrow down the frequencies. Use a high pass filter to cut anything below 300 Hz, and a low pass filter to cut a lot of the higher frequencies. The low pass can be adjusted more for personal taste, meaning the cut-off frequency can be anywhere from 3Khz to 10Khz.

Now that the vocals sound tinny and unpleasant, add some distortion. It doesn’t take much to crumble up a vocal track, so a gain/drive set to anywhere between 10%-20% is probably all you need. Fancy multi-band distortions or plug-ins designed to emulate a guitar amplifier are unnecessary, and usually sound nothing like an actual bullhorn. A simple gain or drive setting and a master volume is all you really need.

Depending on how far you want to go with putting a sidewalk patriot into your mix, you might add one more layer to your illusion. Many people associate the sound of a bullhorn with a sports arena or other space that creates distinct echoes, so a delay effect is appropriate. If you don’t have a delay effect that can sound more “spatial” just by turning a knob, you can create two “delay tracks” copied directly from the original, each panned hard left and right. Each copy should have a delay effect added, but one should have a delay time that’s 25-75 milliseconds longer than the other.

It sounds simple, and it really is. These sounds aren’t difficult, and they are very effective for setting the tone of your mix.