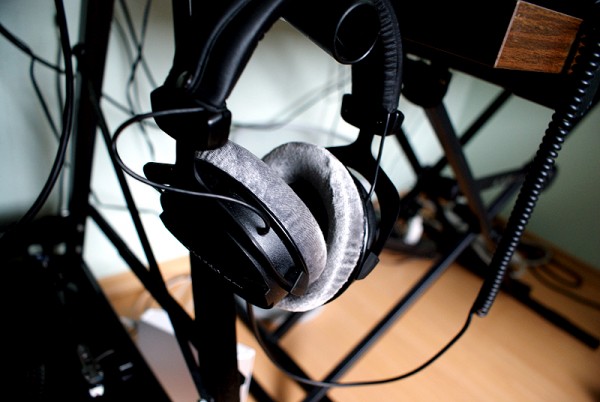 There comes a time in every young producer’s life when he realizes that his Beats by Dre headphones, despite being stylish and sounding pretty great, are a poor choice for professional mixing. Sound systems that are designed for listeners (even the expensive ones) are engineered to affect and alter the sounds coming through them,  and turning off your equalizer won’t change that. Because of this, a serious engineer must invest in a pair of studio monitors and studio-grade headphones designed with a flat frequency response that will give an accurate representation of your sound. Let’s go over the facts, and decide which to buy first.

When tackling this question, the first variable to think about is certainly the cost. No matter how driven you are to have the best system possible, or how much research you do, we are all still limited by what we can afford. Monitors require a heavy amount of research before buying, as the price can range from a couple hundred per studio monitor, to thousands of dollars for a pair. No model of monitor is equal to another, and more expensive doesn’t always mean better.

These reference monitors come in two flavors; farfield and nearfield. Farfield monitors are out of the price range of many independent sound engineers, but they remain an option partly because of their hardiness. A good farfield monitor can handle extremely high levels of sound, meaning they won’t be damaged from small studio “accidents”. Dropping a microphone or turning an amplifier up too high won’t damage a farfield. They are often designed to be built into the wall of a studio space, and are powerful enough to fill the space with accurate sound.

Despite the fortitude and power of a farfield, nearfield monitors have become a much more popular option in recent years. They are a lot easier on your wallet, don’t require nearly as much acoustic treatment of your mixing space, and are a better representation of what the average listener will be using to listen to your mixes. They won’t fill up a large room, or play particularly loud while staying accurate, but at some point many engineers stopped seeing this as a problem.

Studio grade headphones, as you might guess, are a cheaper option than far or nearfield, ranging from $75 to $250 and above. With headphones, the flat response is the first requirement, and other elements such as comfort, durability and aesthetics add to the price tag. If you need to be producing right now with a budget, headphones would seem to have the winning edge.

Some might wonder why they would bother with monitors. Headphones are cheaper, and the sound you get from them isn’t affected by the room. They will let the engineer hear small details in the mix that would get lost on monitors. The problem with headphones, including high-end studio models, is that they are headphones. They are attached to your head, giving each ear a separate sound that never interferes with the sound on the other side. This is not how your music is going to be listened to all the time, so adding studio monitors to your collection of gear is still a priority. Monitors give the producer a better idea of how to mix for a car or home stereo system. Headphones will never alert you if there is an issue with phasing between the left and right stereo sides, or any other way that one side of the stereo image interferes with the other. If you can’t afford monitors right now, understand that headphones won’t work forever.

If at this point, you’re set on buying monitors right now, and $600 sounds like a perfectly reasonable price to pay, don’t break out your checkbook just yet. Though studio monitors are designed with a flat frequency response, the sound coming out will still be affected by the room that they are used in. When deciding between headphones or monitors for your first major purchase, consider the fact that to get the flat response that you paid for, you will need to be working in a room that’s been given some acoustic treatment. Also keep in mind that some monitors are passive, meaning that they need a separate amplifier to work. Active monitors will work on their own.

Once you’ve made your comparisons and analyzed your budget, know that even the best headphones or monitors are still just one reference. A serious engineer should not stop with just testing his mixes on studio-grade gear. He should bring his mix into the world, and put it to the test on a car stereo, expensive and economical home sound systems, all the way down to a pair of cheap ear buds. Take notes, bring it back to the studio, make adjustments, then do it all over again.