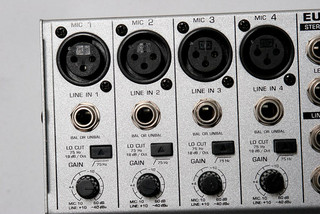 Every person who records music seriously has to eventually deal with impedance. You know what I’m talking about, right? That number next to the Ω symbol? This article is going to give a very basic explanation of impedance, and explain how it applies to the home producer. We’ll explain how the numbers affect the process of recording with minimal techno-speak.

Any kind of electronic device  is going to have components that resist the flow of electricity and electronic signals. This isn’t a design flaw, it’s just the way electronics work. Impedance is the final measurement of the resistance that those components all together cause on an audio device. We measure this in Ohms, represented by the Greek Omega symbol Ω, Sometimes impedance will be represented by a Z, and inputs or outputs will be referred to as being “high-z” or “low-z”.

THE KNOWLEDGE
In recording, there are two types of impedance; input and output. Both the input and output numbers matter when we record something. You can probably guess what the difference is just from the name. Input impedance is the resistance of a device that you are plugging into, such as a recording interface or a mixer. Output impedance is the resistance of an audio output, for example the output plug on a guitar or other audio signal “source”. Back when studio recording was relatively new, almost all equipment followed a standard of 600 Ohms, to ensure that the input and output impedance was always matched.

Here’s the part where knowing the impedance of your gear matters. Today, matched impedance systems aren’t used in the recording studio or in live music settings. Manufacturers don’t build interfaces, amplifiers, tape recorders or microphones with matching impedance, they do the opposite, in a way. Modern equipment is designed to have a very high input impedance, and hopefully a very low output impedance. Industry experts generally agree that when connecting an output device to an input device, you want the input device to have ten times the impedance of the output device. More is even better, slightly less than that can still sound good. It can even sound great, but ten-fold is the accepted number for optimal impedance ratio. It can be okay in a home recording setting to bend the rule a bit, but blatantly breaking the rule causes bad things to happen to your sound, such as hissing or the loss of higher frequencies.

THE APPLICATION
The Shure SM-58 is one of the most popular microphones on the market, so it will be used as an example. Its output impedance is 300 Ohms, a relatively “low-z” output, so in theory we want to plug it into a mixer or interface that has ten times that figure, for an input impedance of 3000 Ohms. Not all mixers, pre-amps or interfaces will have a 3,000 Ohm input impedance, so it pays to do your homework when buying equipment. Be aware of the numbers when building your collection of gear.  Since you might not always be able to follow the guideline of “ten times the output impedance”, it also pays to experiment, and figure out how much you can get away with for those times when perfection just isn’t feasible. Being pragmatic about your resources will result in passable sound, but getting carried away with thriftiness and not getting the right equipment will cause problems.

As we established before, anything electronic has resistors. Those resistors will generate noise when a current goes through them. It’s often a very small amount of noise, but sources of signals like microphones or instruments require a lot of amplifying, and that includes amplifying the noise generated from resistance. That’s why it’s important to balance out the resistance of the source output with an input that has ten times that resistance.

MORE APPLICATION
Impedance is the reason that direct boxes, also known as DI boxes, are a necessity for recording instruments. Because of their design, sources such as guitars have ungodly amounts of resistance. Magnetic coil pickups on an electric guitar can have as much as 10,000 Ohms of output resistance, so DI boxes and instrument pre-amps are designed to handle that. A direct box can have over 1,000,000 Ohms of input resistance, a perfect example of a “high-z” input. If the input impedance is too low compared to the output, or source impedance, you’ll notice that your instrument sounds dull and lifeless. A poor match between the output and input will cause you to lose the higher frequencies from your sound.

Synthesizers and electric pianos with audio outputs can vary in their impedance rating. Oddly enough, that rating is often impossible to find in any manuals or specification charts. The safest bet is to run your keyboards through a direct box. Some inputs will handle  the impedance without a DI box just fine, others won’t.