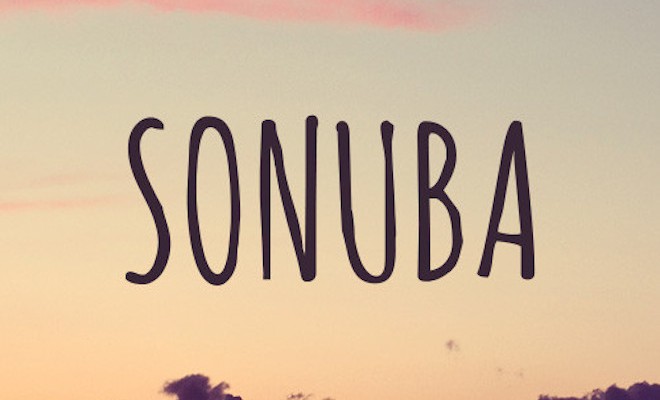 Jazz and Hip-Hop are each marketed to very different audiences, but they share similar musical roots. Sonuba has a style that showcases exactly how well Jazzy riffs and melodies mesh with Hip-Hop style percussion.

He is originally from Estonia, a nation in northern Europe neighboring Russia, and is now based in London, England. He lays out a few interesting things about his first EP, titled EFFORTS, and his own philosophies, including his stand on releasing his EP for free.

Where does the name “Sonuba” come from? Does it have any special meaning in another language or anything like that?
Sonuba: It actually came out of nowhere. It doesn’t have any special meaning behind it. I was just sitting on my balcony, having a smoke and then somehow it just came to me. Apparently Turkish people often have tweets with “sonuba” mentioned, but it turns out that it’s just a common typo people do. I can’t exactly remember what it meant, though.

As an artist and producer, who are your greatest inspirations?
Sonuba: I always find this one a bit of a toughie. Since I have a rather eclectic taste in music, there are quite a lot of different artists that inspire me. But I guess when it comes to jazzy hip-hop, Nujabes would be the biggest inspiration. I know, that’s probably fairly unsurprising. I’m also inspired by other Japanese producers, like Kenichiro Nishihara, Kenmochi Hidefumi, Mabanua, and 45, just to name a few.

If you could do a collaboration with anyone, whether it be a rapper, a composer, musician or another producer, who would you go with?
Sonuba: Working with an awesome jazz band would really cool. Like SOIL&”PIMP”SESSIONS, for example. Crazy guys. But I’m quite open minded and I would love to try working with anyone who there would be some chemistry with.

You recently put out a collab with Dusty Ohms. Do you plan on doing a lot of collaboration projects like that in the future?
Sonuba: Definitely, it was a fun project. I wouldn’t mind doing it all over again.

So, about the EFFORTS EP, what kind of hardware and software did you find yourself using the most while producing it?
Sonuba: My main hardware is my old 24 inch Apple iMac, and my M-Audio Axiom 49 keys. Software wise, my audio workstation of choice is Presonus Studio One and I use a lot of Native Instruments Kontakt VST instruments.

How much of the mix is live instruments, as opposed to MIDI/VST instruments or sampling?
Sonuba: On EFFORTS, the only live instrument recorded was the saxophone played by Mike Rowlands on the track “Until We Meet Again”.

Did you compose, perform, record, and mix down all the tracks yourself?
Sonuba: Yes, it’s all pretty much all self-made. Most of the keys, “live” drums, bass, etc. I played myself using various virtual instruments. And then, of course, there are a lot of samples used.

Do you think you’ll release another EP anytime in the near future?
Sonuba: Yes, hopefully very soon. I’m actually working on two different EPs right now. BACKWARDS, which will have some of my older tunes from 2008 to 2009 revisited. And another one which will have brand new tunes and quite a bit of awesome collaborations.

Hip-hop and Electronic music is trending towards intense, powerful music. Do you feel you have trouble getting attention making more relaxed music?
Sonuba: That is very true, I’m not expecting my music to become very popular. But as long as I can keep on doing what I like and there’s someone out there appreciating it, that’s more than enough for me.

Much of your music can be downloaded for free. Why don’t you charge for it?
Sonuba: I know this sounds cheesy, but music is a hobby, a passion for me. I don’t expect anything in return for it.

Do you have a projected month/year when your next EPs will be finished and released?
Sonuba: I can’t say for sure, but sometime in the Fall this year [2013].