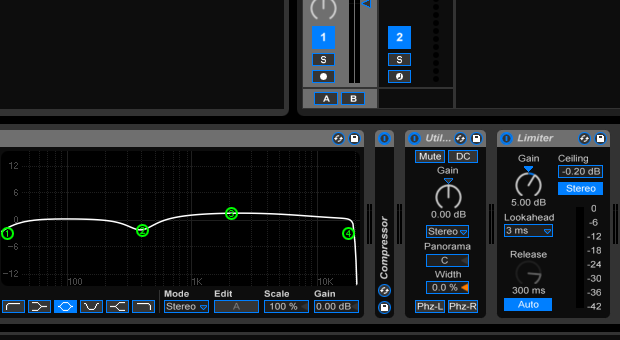 Make a Simple Master Chain in Your DAW

If you’re planning on releasing a track, sending it to a mastering engineer first is usually a good idea: mastering music involves a different set of skills than producing it, and running your track by a second set of ears can be invaluable in finding problems that you otherwise would have missed. If you just want to quickly throw a track up on Soundcloud, though, here’s a simple pseudo-mastering chain that you can use right in your DAW to make your production sound its best. Every track is, of course, different, so take these steps as a starting point rather than a strict set of rules.

The first plugin in the master chain should be an equalizer. Start by high-passing everything above 30 Hz and low-passing everything below 20 kHz: these frequencies are essentially inaudible, and can cause muddiness or harshness in your production. Next, listen to how your track sounds: does it need a little more fullness in the low end? Some more sparkle in the highs? Are the lower mids too muddy? Use the equalizer to make low-gain, fairly wide-bandwidth boosts and cuts in your track’s frequency spectrum. You should only be boosting or cutting a couple of decibels with any given EQ point: if you find yourself making more drastic adjustments, it’s time to head back to the mixing phase.

After equalizing your track, drop a compressor plugin onto the master (after the EQ). As with the equalization step, gentle adjustments are key here: use a low ratio (2:1 at most) with moderate-to-long attack and release settings. Keep a light touch on the threshold control: you’re trying to glue the different elements of the track together, not squash them into a brick. Use a soft knee setting if your compressor allows you to adjust this parameter: this will smooth out the sound and prevent the compressor from pumping too hard.

One of the most important parts of adjusting the stereo image of your EDM production is making sure that your track sounds decent in mono. Drop your DAW’s stereo imager plugin onto the master and turn its “Width” control down to zero. Flip back and forth between zero and 100% width: if any element of your production suddenly becomes quiet or even disappears, it’s likely suffering from phase cancellation. To fix this, try going back into the synth and adjusting the unison or spread controls; you can also try using the imager plugin on the synth’s channel to make its stereo field more narrow. After adjusting the problem element’s stereo field, listen to your track again while flipping between mono and stereo: ideally, when you switch to mono, everything should remain at the same volume.

The final plugin in your master chain should be a limiter. Set the limiter’s ceiling to -0.2 decibels, then slowly turn up the gain control (or drag the threshold control down, depending on the plugin you’re using) until you see the limiter’s attenuation meter just barely begin to activate. This should bring the volume of your track up to a decent level without causing it to clip and distort.