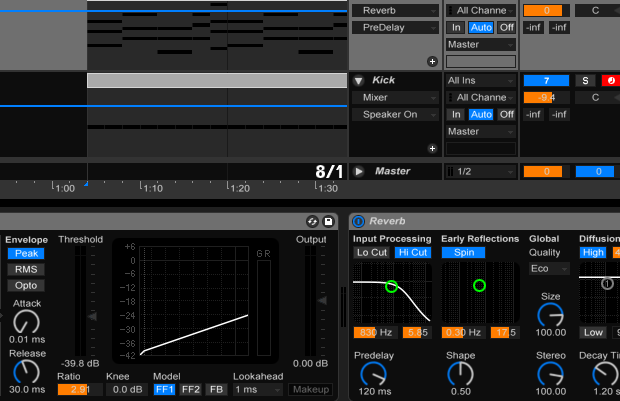 Manually Syncing FX to the Beat

Synchronizing the timing of an audio effect to the tempo of your track can make a subtle but important difference in the sound of your production. Although more and more plugins now include built-in BPM-sync functions, if the effect you’re using doesn’t support synchronization, you can calculate note length times manually, then use them to sync any time-based parameter to the tempo.

First, divide 60,000 by the tempo of your track. So, if your track’s at 125 beats per minute, divide 60,000 by 125 to get 480. This value corresponds to the duration of a quarter note in milliseconds. From this, you can calculate other note durations by multiplying or dividing the quarter-note value. So, for example, if you want to synchronize an effect to an eighth note, just divide 480ms by two to get 240ms. For a half note, double 480 to get 960ms. If all of this math is taking you out of the creative mindspace, you can use an online or mobile app delay calculator to perform the same conversion.

The most obvious application for this technique is with a delay plugin. Load the delay onto a channel, then simply set the delay time to the number of milliseconds corresponding to the note value to sync the delayed sound to the BPM. You can use the same technique with the pre-delay setting on a reverb plugin: for example, if you’re adding reverb to a snare in a 125-bpm track, trying setting the reverb’s pre-delay control to 120 milliseconds. Play the snare; you’ll notice that the reverb kicks in one sixteenth note after the snare plays, allowing the initial snappy transient to come through unclouded.

You can also use this technique to synchronize the release time on a sidechained compressor to make a synth pump in time with the beat. To hear how this sounds in action, load up a long, drawn-out synth sound (like a pad) in your DAW, then add a compressor to the synth and sidechain it to a 4-to-the-floor kick drum loop. Turn the compressor’s ratio up and threshold down, then start playing the synth and drum together. Turn the attack on the compressor down, then set the release control to a millisecond value that matches a note length at your chosen tempo. Sticking with our 125-bpm example, set the compressor’s release to 30 ms (a 1/64th note); you’ll hear the synth smoothly pump in time with the rest of the track.