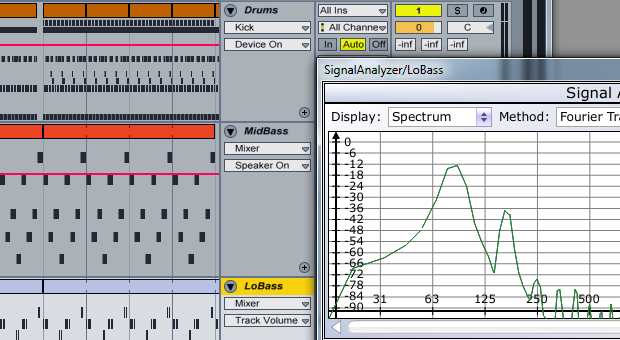 Preventing conflict between similar musical elements is one of the most important parts of mixing a track. The bass synth and the kick drum are usually the two lowest-frequency elements in an EDM production; as such, they’re especially prone to conflicting with each other. To prevent this conflict, change the timing, frequency, and/or volume of the bassline.

The easiest way to keep the bass and kick from fighting with each other is simply to play them at different times. By positioning the bassline’s notes around the kick drums, you can keep these two musical elements from conflicting. If you’re making a house track, for example, the kick would be on beats 1, 1.2, 1.3, and 1.4, so you’d place the bassline’s notes on 1.1.3, 1.2.3, and so on. This technique isn’t perfect, of course: a strictly off-beat bassline can sound overly ‘bouncy,’ especially in a four-to-the-floor track, and the limited number of beats on which the bass can fall can constrain your creativity.

The bassline occupies a fairly large portion of the frequency spectrum: usually from around 40 Hz to as high as 200 Hz. The kick falls in the same range, but has a much narrower bandwidth, meaning that you can remove the frequencies that the kick uses from the bassline’s channel without affecting the bass’ sound quality too much. Drop a spectrum analyzer plugin onto the kick channel, then make a note of the kick’s peak frequency. Put an equalizer plugin on the bass channel, then use it to ‘scoop’ the kick’s peak frequency out of the bassline. This allows the kick to come through in the mix, rather than being overpowered by the bass.

If the kick and the bass are still conflicting, you may need to take more drastic measures. Forcing the bassline’s volume down when the kick plays, then allowing it to come back up between kicks, ensures that the two won’t conflict with each other. You can do this manually with volume envelopes, but it’s far easier to adjust the bassline’s volume automatically using a sidechained compressor. Put a compressor plugin on the bass channel, then route the kick drum to the compressor’s sidechain input. When the kick plays, the compressor will squash the bass’s volume down; when it stops, the volume will come back up. Adjust the compressor’s threshold, ratio, attack, and release controls until you find a smooth, clear sound.