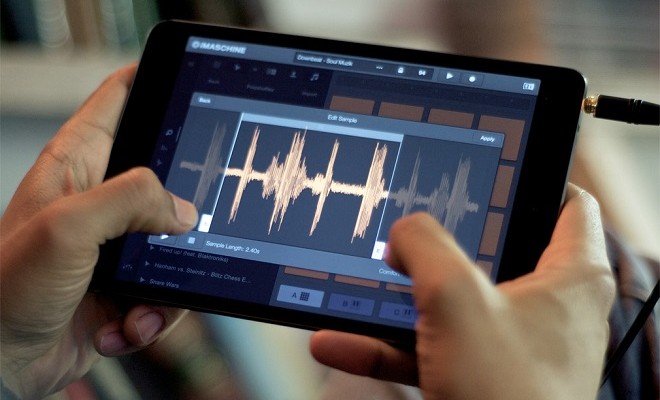 Native instruments have just released a huge update to their popular iMaschine app. For the first time, the app is optimized for iPad and it has received numerous improvements to its functionality. The good news for anyone that already owns the app is that the update is free for existing owners; for the rest of you it will cost $4.99, which is still really pretty good value. If you are not familiar with the app, it is intended as a one-stop-shop for creating beats on the go and is one of the big players in iPad/iPhone beat-making.

For the first time, iMaschine makes use of the iPad’s larger screen. The screen size has allowed NI to cram plenty more features into the performance screen, allowing for a much smoother workflow. You can now operate the app two-handed, and access the 16 drum pads, 2-ocatve keyboard and audio recorder on the same screen as the edit and performing functions. Take a look at Jamie Lidell and Qkidz performance below to get an idea of how this works.

In addition to the new layout, there are a number of other new features included in the update. In addition to the standard iMaschine library, there is a new expansion pack made up of sounds from the recently released Maschine 2 library. A great new feature means that you can also now sample portions of songs from the iTunes library on your device by setting start and end points. This will be a great way for you to pull out beats from your favourite records on the fly. There is a brand new XY control for FX; it is a complete mystery as to why more music making apps on iPad don’t include XY controls. The iPad is built for controlling parameters in this way. This is a really satisfying and intuitive addition. Another workflow improvement in the form of a swipe to undo/redo has also been added, and finally, there is now a metronome function. This is a feature that iMaschine users have supposedly been crying out for, so no doubt this will be gladly welcomed in some quarters.

Additional information on iMaschine is available at: