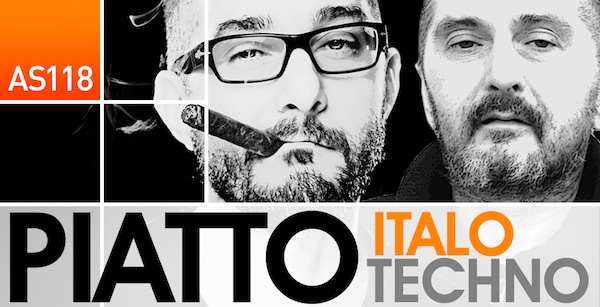 Loopmasters’ “Piatto Italo Techno” sample pack collects nearly a gigabyte of drum and synth sounds from the duo Davide and Alessandro Piatto. The pack focuses on deep, spacy techno, and includes both pre-made loops and one-shot samples for building your own.

What makes “Piatto Italo Techno” really stand out is its inclusion of loops from some of the artists’ top tracks. These “Signature Sounds” are more like remix stems than standard samples: the pack includes the acid 303 lines from “Yeah,” the pounding bassline from “Rolling in Dub,” the trembling synths from “Lost Control,” the pumping sidechained pads from “Can’t You See,” and much more. You even get the full vocal tracks from Piatto’s “Cosmic Girl” (tucked away in the “FX” folder). These signature loops would work well as the base for a remix of one of Piatto’s tracks, or as a starting point for reverse-engineering the riffs and timbres, then applying the knowledge to design your own Italo-techno sounds.

The rest of the “Loops” section features rolling drums (both full loops and percussion tops), off-beat basslines, and blurry, spaced-out synths. The drums are straightforward, simple, and usable, and the top loops add some instant swing and groove to a beat. Piatto’s synth loops selection has a mix of arpeggiations, chord progressions, and riffs, focusing more on subtle, textural sounds than in-your-face big-room styles; like the drums, the synth loops have quite a bit of analog dustiness and gritty character to them. Many of the synths have a fair amount of effects and automation pre-applied, which could make them a little difficult to fit into the mix. The bassline loops are on the subtle, deeper side — more for propelling the beat along than grabbing the dancefloor’s attention.

The one-shot drum samples are decent enough; if you’ve been producing for long enough to have collected your own sample library, though, there’s probably not much — besides maybe the smooth cymbals and clean-sounding claps — that’ll replace your favorites. The lead synth multi-sampled one-shots span five octaves, and the basses up to four, with each octave containing four individual samples. These comprehensive sample-sets makes it easy to set up natural-sounding synths in a plugin like Ableton Sampler: because there are so many individual instances of each sound, the sampler never needs to stretch or shorten the sound all that much. Like the rest of the synths, the chord one-shots have a nice analog noisiness to them — perfect for a more old-school techno vibe. The FX section includes a set of sweeps and risers, ranging from the standard white noise to more inventive metallic textures. In addition to the raw one-shots, “Piatto Italo Techno” also includes the standard assortment of pre-mapped patches for various samplers (Logic, Reason, Kontakt, Halion, and Cakewalk).

If you’re a fan of Piatto’s Italo-techno sound, this Loopmasters pack is well worth a look, especially for the “Signature Styles” section. Many of the sounds — especially the top loops and synth riffs — would also work well for deep house production.

James is the creator of Producer Tools, the ultimate mobile app for music producers. Check out his music production tutorials at Quadrophone.com.