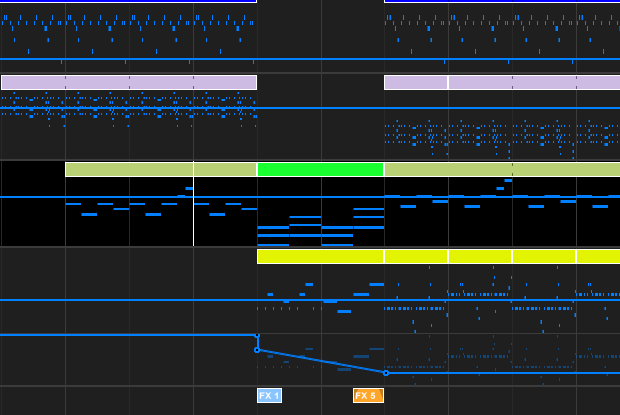 EDM producers, maybe even more than other musicians, are prone to getting stuck in a perfectionism trap. We can spend hours — days, even — adjusting the attack on a compressor, or shaping the transient on a snare so that it’s exactly the way we want it. It’s easy to get caught up in a spiral of endless tweaking instead of actually writing music. To force yourself to get musical ideas down, try this exercise: in it, you’ll compose, arrange, and mix a track, start to finish, in less than half an hour.

Before beginning the exercise, you’ll need to decide on some basic parameters for your track. Pick a style, general mood, tempo, key, and time signature. Set the tempo and time signature in your DAW; if your workstation allows you to limit notes to a certain key (as with Ableton’s Scale plugin or FL Studio’s Key/Scale Restriction function), set it to use the notes in the key you’ve chosen. Next, set up the sounds you’re going to use in the track. I usually load up a bank of drum samples, a bass, a lead synth, a pad, a background synth, and a few FX; depending on your style, you may want to use a different set of sounds. If you have the time, you can custom-build synth patches for the track; otherwise, use presets for the exercise and replace them with your own sounds afterward. Put each instrument on its own channel in your DAW, then add an EQ and a compressor to each channel. Add two return channels to the set, then load a reverb onto the first return and a delay plugin onto the second. Finally, find a timer program (like this one) and set it for 30 minutes.

When you’re ready to begin the exercise, start the timer. Don’t touch the synth controls from now on; this part of the exercise is purely about composition and arrangement. Start by programming the drums; add a snare on 1.2 and 1.4, then start throwing in other drum samples to fill out the pattern. Don’t worry about writing the best rhythm ever; just try to quickly find a groove that works. When you’ve got a good one-bar loop, extend the drums out to eight bars and quickly drag a few notes around to add some variation. Next, move on to one of the synths (I’ll usually compose the bassline now); quickly write a one-bar riff, then extend it out to eight bars and move some notes around as you did with the drum loop. Repeat the process for the rest of the synths, keeping an eye on the timer and being sure not to spend too much time on any one element. When you have an eight-bar loop for each instrument, extend all of the loops out so they stretch across the full length of the track. Create an arrangement by deleting certain instruments from each section of the track: you can start with a drums-and-bass intro, for example, then introduce the pads, then bring in the lead during a beatless breakdown, and so on. Throw in FX at the beginnings and ends of sections to punctuate the track.

Now it’s time for a quick mixdown. High-pass everything except for the drums and bass (using the EQs that you already have loaded), then make quick, rough boosts and/or cuts to each instrument as needed. Make a few rapid, broad adjustments to the gain faders and compressor parameters to quickly get a good volume and dynamic balance. Again, don’t worry about perfection here; you’re just trying to get everything into roughly the right area. Add a bit of reverb and delay to each instrument using the return channels; if you have time, add any additional effects plugins that you want to use. Finally, drop a limiter onto the master, set its threshold to -0.2, and drag the threshold down until you hear attenuation. If all’s gone well, you should now have a very usable track layout that’s taken you less than half an hour to put together.

James P is the creator of Producer Tools, the ultimate mobile app for EDM producers. Read more of his tutorials at Quadrophone.com. Watch a recording of him producing a track in half an hour here.