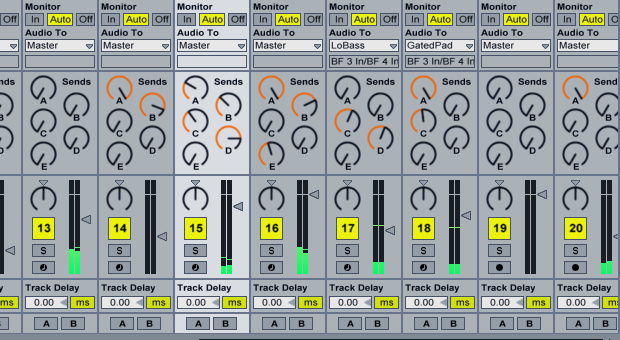 Return channels are special audio channels in a DAW that accept audio input from an instrument, run it through an effect like reverb or delay, then send the effected audio to the master channel. You can control the signal level that each instrument in your DAW sends to a specific return channel by using the “Send” knob for that return. When you turn up an instrument’s “Send,” your DAW starts sending the audio from the instrument into the return. The higher you turn the “Send” knob, the more audio goes into the return. Essentially, the “Send” knob acts like the “Wet/Dry” control on an insert effect, with the important difference that, even if you turn “Send” all the way up, you’ll still hear the dry, un-effected audio as well.

Using return channels instead of insert effects has two huge advantages when you’re producing music in a DAW: resource conservation and coherence. If, for example, you want to use reverb on a guitar, piano, strings, and vocals, add the reverb to a return channel, then send the four instrument channels to the reverb return. Instead of running four separate CPU-hungry reverb plugins, your system only has to deal with a single plugin, saving you a significant amount of system resources. Sending different instruments to the same effect plugin also ensures that they sound acoustically coherent: most reverbs, for example, emulate the characteristics of a certain acoustic space. When you send a set of instruments to the same reverb, they’ll all sound like they were recorded in the same space.