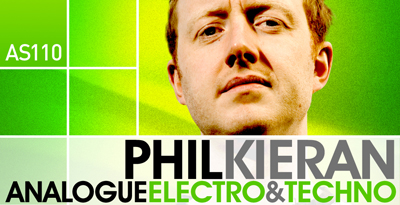 Producer and DJ Phil Kieran is known for his deep analogue techno sounds on original productions like “Empty Vessels,” collaborations like “Snakes Crawl” (with Bush Tetras), and remixes for artists like Inner City and Green Velvet. His new “Analogue, Electro, and Techno” sample pack, available from Loopmasters, gives you the chance to integrate some of Kieran’s retro-future tech vibes into your own productions. The pack includes pretty much every format you’d ever want, including Reason, Kontakt, and Logic Patches; all the loops come in both REX and WAV formats (the whole pack is also available as an Ableton Live Pack, Reason Refill, or as Apple Loops).

The single-hit drum samples aren’t incredibly numerous, but they’re nicely varied: the kick drums, for example, range from long and deep 808-style bass drums to short, clicky, attack-y kicks. The snare samples have a warm grittiness to them that adds some body to the backbeat. The hats and shakers have a lot of analogue roughness in their tone; depending on the style you’re going for, you may need to process them fairly heavily. All of the drum hits definitely benefit from being layered together, rather than being played on their own. The bass single-hit section is fantastic, with everything from buzzy to deep to wobbly bass tones included. They all have that rich analog fullness to them, and they’re all long enough that you can drop them into a sampler and play nearly any style of bassline without worrying about looping the sample. The synth hits section of “Analogue, Electro, and Techno” also has some nice spacey-sounding analog tones; many of them have heavy LFO modulation, so you’d need to do some warping if you want to sync the modulations up to the beat. Phil Kieran’s sample pack also includes a set of FX, risers, and vocal samples; the sweeps and risers especially have a warm and fuzzy analog feel to them.

Like their single-hit counterparts, the bass loops have a nice variety of analog timbres. There’s a heavy emphasis on single-note basslines, so these loops would be most useful when played through a sampler or with a transposition envelope. The synth loops are more musically varied; there are some fantastic string-like samples in here that may not sound incredibly impressive on their own, but seriously fill out the mix when you drop them into your production. Every loop is also helpfully tagged with MIDI-friendly musical key markers. As for the drum loops, the Phil Kieran sample pack contains both a set of full, bounced-down loops and a collection of stems separated into kicks, snares, cymbals, and so on. The stems are grouped into kits, making it east to quickly find complementary loops. Finally, the pack includes a small set of wordless vocal samples and loops, which work nicely when sidechained to the kick.

All in all, Kieran’s “Analogue, Electro, and Techno” pack is definitely worth a look if you want to add some rough analog warmth to your productions. Given the range of sounds displayed in the loop and synthesized hits sections, a few more single-hit drum samples might have been a nice inclusion — but you can always cut up the loops and make your own hits.