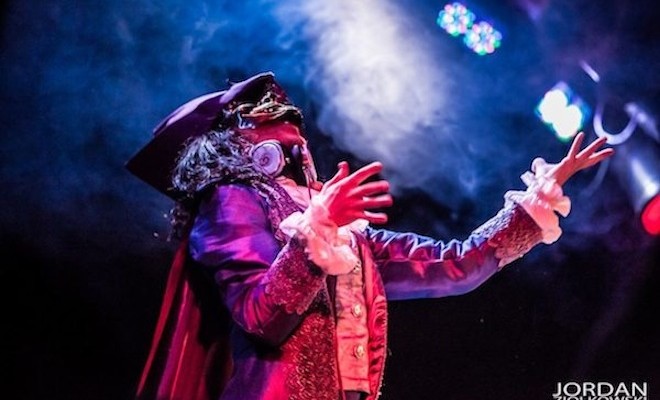 Savant: “The Foundation For The Sound I Make”

He’s famous for his fast output of songs and for being upfront about his diagnosis of Asperger’s Syndrome. After a healthy amount of touring, he’s now also known for his flamboyant costumes and energetic stage presence. Aleksander Vinter, more commonly known as Savant, took some time to talk with Soundista about his methods for achieving his signature sound.

What’s your software/hardware setup for producing music?
Software: I use FL Studio, that’s about it. Can’t get any shorter and sweeter than that. I don’t have any hardware set up, I use a laptop, mostly, ’cause I travel a lot, and when you want to work on your project when you get home you still want to have everything intact. I just use the same laptop so it’s easier.

Hardware: MIDI controllers and stuff, that’s probably it. I have some Akai stuff and different types of controllers. Some Roland key-tars and stuff I don’t use anymore. It’s not that big, you know? It’s just humble. It’s really small and it’s got a lot of horsepower.

What plug-ins in FL Studio do you use the most?
I like to go for basic stuff. I like stuff that doesn’t draw CPU, because I layer a lot and the computer can’t handle too many layers of big VST plugins. So, I go for more simple stuff  in FL Studio like 3XOsc, Sytrus. Harmor is also a very good plug-in. These three are like the foundation for the sound I make.

Do you have a stance on the Mac vs. PC debate?
Not really, I could have used a Linux if they had Fl Studio on it. The hardware doesn’t matter to me at all. I use a Macbook with Windows running on it, that kinda defeats the whole thing.

Do you do all of your own mastering?
You don’t get better if don’t try everything yourself in the musical aspect of production. So I’ve always mastered my own stuff. Mastering is something of shaping the sound, not just making it sound good for speakers and headphones and laptops. It’s also shaping the intensity and the dynamics of the song, so I always want full control over all that.

What’s your setup when you play live?
My live setup is the same as my studio set-up. I use FL studio when I play live so I feel most comfortable. Also, if something goes wrong it’s super easy to fix because it’s my home. It’s my base. I can make a DJ style setup, which is very creative and very fun in my tastes. When I play live, I can make channel 8 be C and D inside FL Studio, and control them with MIDI faders. Then, make a huge setup of songs on top of each other, fading back and forth and making quick mash-ups live.

But, when the keyboard gets sweaty and your fingers aren’t moving as fast as they should, it kind of messes up the live thing. It’s unstable compared to Traktor, or anything like that, ’cause it’s got a sync button and it’s got all this stuff and it’s all on beat. But in FL Studio, something goes wrong it kind of messes up the whole arrangement. It’s more dangerous, but it’s more fun for me to do that.

The other arrangement I do when I play live, is I do layered songs so I can cut out parts of different songs. I use my FL Studio Stems live. You know, drums, bass, synths, and vocals. I can turn off the drum layer for a while, then bring it in again. Mess around and make live edits and stuff like that. That’s pretty fun, but sometimes the CPU doesn’t like it too much (laughs). I really want to have more laptops on stage so I can do that more. Or maybe a more powerful one when they come out, right now it’s not really cutting it. There’s a lot of glitching on the stage: *KGGHHHHH*.

You’ve released everything on SectionZ Records, what makes you stay with them?
SectionZ Records didn’t start out as a record label. It started out as a community, like if you mixed Facebook with Soundcloud. It was for musicians and underground bedroom composers. Deadmau5 was there back in the day, that’s where he started off. I started off there and there are tons of other dudes who started off there.

It was more like a forum where people reviewed each others tracks and stuff to get better. The whole point of the system was you had to review, you had to help others. There’s stuff in place to enforce that. That helped me become a better musician and a lot of other cats, too. It turned into this cute little label thing that caught my attention. My first release as Savant was on this label, and I think I’m going to continue doing that because it feels right. It’s because I know the guys, basically! Known ’em for 15 years, and we all stand in the same place.

You’re known for releasing an insane amount of music in a short time. Do you plan to keep that up?
The output is what makes this thing what it is. And the thing is, I wanna keep up the pace, too. I wanna do more. I feel like I’m slacking, I feel like I’m not doing what I can and what I’m supposed to do. Last year I released 4 or 5 albums, and this year I’ve only released like 1 album and an EP, and that really pisses me off. But that’s touring! Taking my studio away from me. Next year, I want to release like 8 albums. That will be a good year, my goal right there.

Is there a release date for the Kali 47 music video?
We talked to Mike Diva, the director of the video, and he said 4 to 6 months, maybe. It’s a big process, really big production stuff, so he’s gonna take his time on that. A lot of costumes have to be made, there’s a lot of scenery that has to be made, and stuff like that.