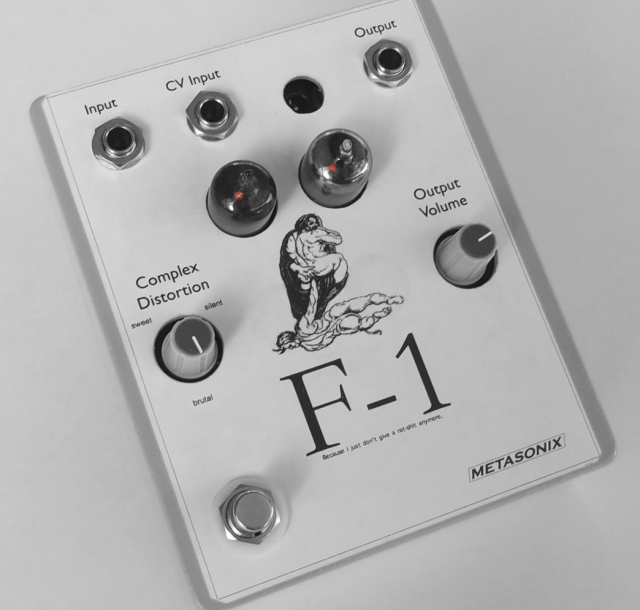 Smoke from this Distortion Pedal

Eric Barbour of Metasonix has manufactured some pretty hard and heavy effect pedals. Using the traditional vacuum tubes that have since gone out of style. With these classic parts put to use, Metasonix has never been shy about the rapture of attitude that each one delivers. And with that segway we introduce to you the F-1.

From the photograph alone you can see on the left hand side a dial that simply says Complex Distortion. Either have it sweet, silent or brutal. Nothing has seemed more proficient or pleasing to the eye than those three words. With Metasonix known for an effect called TM7 or the Scrotum Smasher. It is no surprise that they would want to create something that is far less than blowing your face off with a torch. For the amount of $299, this haze, eerie complex tubed being has you bending at all angles to capture the feedback that leaves you seizing in its presence. With the pentode circuit smoothing out the extreme and parasitic host of sounds that utter out. On the Complex knob it varies between two things, the plate giving in to the pentode to complete the chemistry of a non-exist symmetry.

No shock that this puppy is already on ebay at the starting price. But maybe a few of you could haggle it down. For any band that wants a soul crushing abomination, this tool could be just what you are looking for. Whether you’ve decided to add some fuzz to the buzz that’s racking your brain at night. Or you just want some loud noise to accompany you in the factory of music making. If at all possible let us know how this baby works before we put the time and effort into it. But just from the look and sound of things Eric has out done himself once more. And for that I applaud him and expect to see this effect used by some of the best heavy hitting guitarists.