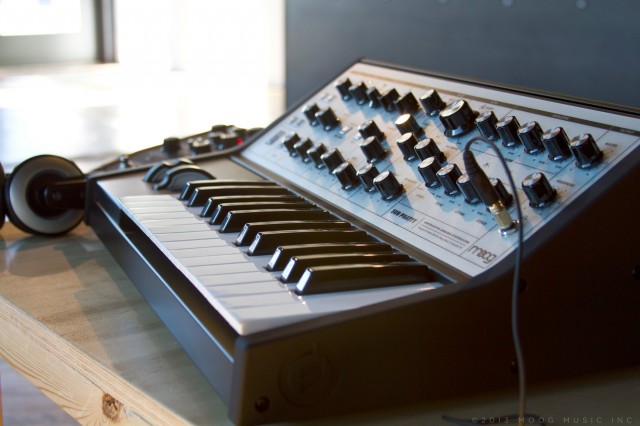 The new Moog Sub Phatty Synthesizer may become the number one machine of musical inclination that you would ever need. While not only does this almost $2,000 dollar instrument need no warm-up time and requires an accuracy that could make you weep. As long you plug in and turn on the power, you are ready and set to record the music you so hauntingly hear in your own mind.

If any synth could be referred to a human being, this one would be considered a Jimi Hendrix mixed with Screaming Jay Hawkins because with Moog’s new Multidrive section that has not been used before. Adds to a harsh screaming, pulsating sound that if pushed accomplishes the vivid world that lives inside. But set at a lower setting has a warm subtle stance to it’s creative end. The oscillator which helps craft the bass part of the deeper sound that combines the three already installed in the system. And while you are still mesmerized by the surface, below it the parameters are even greater. Also are you tired of that usual situation were some actions are near to incapable of being accessed, since it seems the software has hidden them within the layers of the extraordinary process. Well Moog has taken a step further and everything is accessible from the front panel.

This new invention for Moog brings along a character that rushes to life all the features the company is known for. But adding that mix that gives you the responsibility to transform machinery into invitation for an era of music.

In the video we have Cyril Lance (chief engineer) talks about Moog’s engineering choices made while the development for the new Sub Phatty was in production. All the while being accompanied by Bernie Worrell of Parliament/P-Funk.