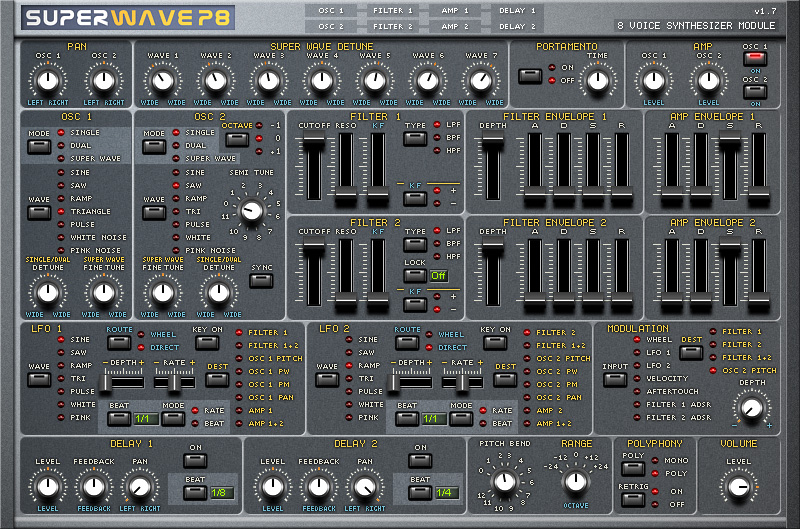 Commercial VST synthesizers can sound great, but their prices range well into the hundreds of dollars. If you want to expand the sound design capabilities of your digital audio workstation, check out these three freely downloadable VST synthesizers first. Atlantis and Superwave P8 only run on Windows systems, while Synth1 is available for both Windows and Mac.

The interface for Atlantis is a bit more complicated than most VST synths’, but once you get your head around the way it works, you’ll find it’s one of the most powerful plugins out there. Atlantis has three dual-waveform oscillators, each with a handy oscilloscope-style readout so you can see what kind of ridiculous waveforms you’re creating with the “Morph” function; multi-stage envelopes for each oscillator (plus two assignable envelopes); and two “Combiners,” which allow you to mix two modulators (like an LFO and an envelope), then use the combined signals to modulate something else. It even lets you load your own WAV-format files as wavetables. Routing is supremely flexible (you can assign just about any parameter to any other), and the “Random” buttons can give you a quick shot of sound design inspiration.

The Synth1  is one of the best VST plugin is inspired by the Clavia Nord Lead hardware synths, and its full, rich sound is impressive, especially given the price and its low CPU footprint. Its simple, one-page interface and hardware-style controls make it a good plugin to learn about synthesis with, and it’s got enough depth that you’ll keep using it as your skills develop. The manual and included presets are limited, but as it’s one of the most-beloved synths on the Internet, there’s plenty of userbase-supplied support, and over ten thousand user-created patches available for download.

The Superwave P8 virtual analogue synth loosely emulates a Roland JP-8000. As the name implies, the most exciting feature of this plugin is the “Super Wave” function: setting any oscillator to super wave mode gives you seven additional voices, all of which are individually detunable. Use the super wave function to create classic trance-style supersaw leads, or try it with other waveforms to make a supersquare or superpulse. The Superwave P8 excels at creating wide, rich pads and leads, and if you want to cover “Are Friends Electric” or the X-Files theme, it has a preset for that.

James P is the creator of Producer Tools, the ultimate mobile app for music producers. Read more of his tutorials at Quadrophone.com.