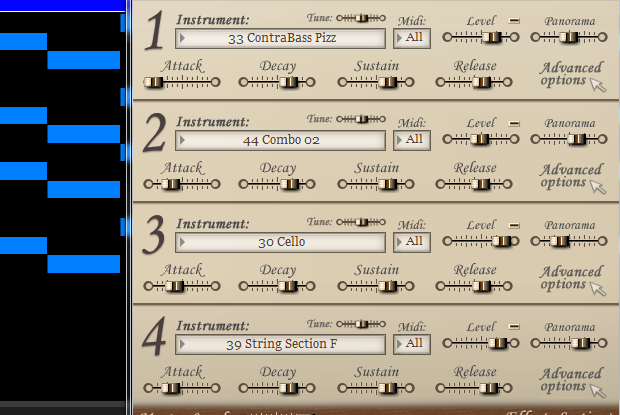 The complex timbres and articulation techniques of acoustic strings make them among the most difficult instruments to accurately reproduce in a DAW. Not surprisingly, the prices of top-grade string VSTs can reach well into the hundreds of dollars. If you want to add some orchestral sounds to your EDM production without committing to a commercial library, try these three free string VST plugins: although they may not have the depth of the large string libraries, they’re lightweight, free, and sound great.

For a freeware plugin, DSK Overture features some amazingly realistic string sounds. The synth allows you to load up to four patches at a time, each of which can be controlled by its own MIDI channel (or all four by the same channel); you can choose from violin, viola, cello, bass, and full string section patches, each of which comes with several different articulations. You can simulate further articulations using the ADSR envelopes, and each layer in the synth has its own filter section. There’s also a master effects section with the standard reverb, delay, and chorus FX. As a bonus, DSK Overture also includes a full set of non-string orchestral instruments, including woodwinds and brass (although these generally sound a lot less natural than the stringed instruments). Download it here (Windows only).

Orchestral Strings One uses a combination of sampling and physical modeling to create a its string emulation. It sounds a bit artificial, especially in the higher registers, and when you apply legato glide, but allows for a large amount of control over the final sound. You can select from a variety of articulations and playing techniques, including sordino (muted), staccato, and pizzicato; add some randomized humanization to the vibrato and built-in step sequencer; and customize the timbre of the strings by cutting or boosting the “Harmonic” and “Second Harmonic” parameters. You can even blend the sonic perspectives of the different sides of the virtual stage by adjusting the “Player” and “Audience” sliders. Unlike DSK Strings, Orchestral Strings One doesn’t have separate patches for different instruments: instead, it automatically selects a mixture of strings based on the octave that you’re playing in. Download it here (Windows and Mac).

Unlike the other VST string synths, Cellofan only plays one sound — but it plays that sound extremely well. The controls are about as minimal as it gets: you can only adjust the attack, release, and slide times of the cello. Cellofan’s rich, full sound, though, rivals any virtual cello that you’d find in a commerical orchestral library, and its resource usage is almost non-existant: even with four or five instances playing at once, it barely registers on the CPU meter. The synth is apparently no longer supported by the developer, but is still available for download here (Windows only), and is definitely worth a listen.