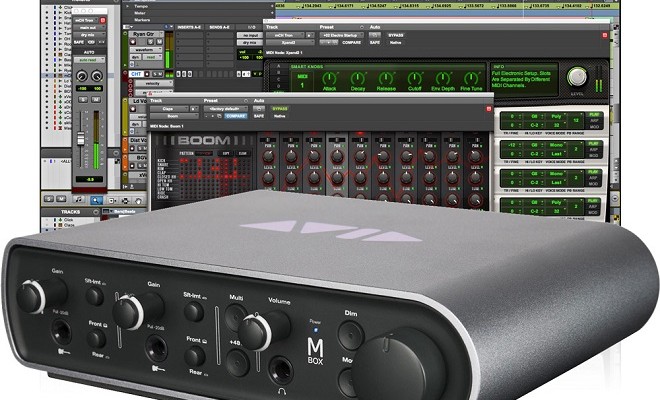 There are several must-haves you should invest in if you really want to get serious about electronic music. Obviously a good DAW and packs of samples and loops are vital, but in this case I’m talking hardware.

There are tons of options available, from mixing boards to samplers to drum machines to studio monitors, and the sheer quantity of it all can be somewhat dizzying. But you don’t want to worry about that, right? You just want to actually create music – and that’s why you need to boil it down to bare essentials.

Different producers may advise you otherwise, but as far as I’m concerned, one of the first investments you should make is in a good audio interface.  In fact, I would go so far as to say it should be the very first thing you purchase.

Audio interfaces produce sound in a much more sophisticated manner than your computer’s onboard sound card does, so you can hear the full spectrum of your mixes and tweak them to sound cleaner, louder, and punchier. They commonly function with USB or FireWire cables and contain input and output jacks, so you can plug in microphones or instruments and record and listen directly through the interface.

They also reduce the strain on your computer’s CPU, meaning you can work with a higher bit rate and have more tracks running at once without your audio skipping or cutting out. While some are more complex than others, all of them are absolute essentials for producers at every skill level.

There are countless models that are much more expensive (and much more complicated), but no need to worry about those for now. As you’re about to see, you can get a professional audio interface for far less than $1000, and if you do you’ll soon be able to match the quality of most studio recordings!

For the beginner to the world of music production, this USB-powered little bad boy is practically a gift from the gods. At $189 (as of now, it’s actually only $149 at Guitar Center, go here to check it out) it’s one of the cheaper options out there, and it packs a real punch. Its recording and resolution playback maximum is 24 bit/96 khz, you get 2 XLR preamps for microphones or external instruments, and there’s a switch to enable direct monitoring so you can listen to your sound without having to touch the computer. For each preamp there’s a gain knob that has a color-changing ring around it, which changes from green to orange to red, to show you when your audio is clipping. Helpful perk!

It also comes with some great digital tools, including Ableton Live Lite –an excellent DAW that needs no introduction – and a suite of plugins made by FocusRite, including a compressor, an EQ, and several effects.

With this little bundle alone you could get started as a music producer right away!