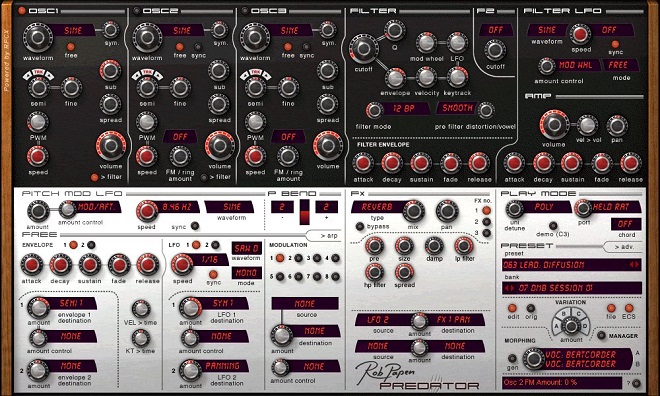 2015 is already looking promising for the VST world, if some of the best plugins from last year are any indication. There were some excellent updates to modern classics and all sorts of new faces that popped up along the way.

This short list is a mixed bag of premium and freeware plugins – if you have any holiday money left over I recommend that you consider investing in one of the premium ones, because they pack some serious power.

You should definitely check all of them out, though, as they could all be stellar additions to your sonic arsenal!

This freeware softsynth is an emulator of the Yamaha DX7 synthesizer, which was released in 1983. But don’t be misled: not all of its sounds are 80s-tastic. It actually comes with some beautiful pads and plenty of other useful presets to keep you busy for quite a while. And, of course, if you do want some new-wave-sounding textures, this would be a good place to find them.

Also, if you’re a proud owner of an original Yamaha DX7 – which I doubt many of you are – you can use this emulator as a means to create new patches for your synthesizer, by tweaking them on your computer and then sending them to the synth for immediate use. Maybe not one of the best features of this VST considering how few people probably own the hardware, but still a fundamental aspect.

It’s hard to go wrong with this one; it’s versatile, it’s efficient, and it’s free!

Is it game-changing? No. Is it innovative? No.

Is it versatile, easy to use, and free? Yes!

BrainStormer was a nice surprise from last year: it’s pretty standard when it comes to softsynths, but it has a well-designed interface and doesn’t have an intimidating amount of features and parameters to tweak. The sound quality is good and it’s a great introduction to the world of softsynths for novices.

Once you get used to how it works, you’ll be crafting your own synth sounds in no time – and it’s always good to have a free way of doing that.

With over 4,000 presets categorized by musical genre, strumming simulation for its “chord mode,” an efficient arpeggiator and all sorts of other features, Predator has been one of the best VSTs around for years. If you’ve been interested in VSTs for a while then you’ve surely heard of this one by now.

There is a demo available for download, however it only works for 30 minutes at a time, you won’t be able to save your presets, and it will only work for 30 days, after which it will add noise to the playback, rendering it relatively useless. It costs $179 for the full version, but at least with the demo you’ll have plenty of time to get a feel for how it works and what you can create with it.

This second generation of the Zebra softsynth is more powerful than its predecessor in pretty much every aspect. It has a huge bank of original sounds and contains many of the usual suspects when it comes to methods of modifying textures, but it also has a very useful Wave Editor page that lets you generate your own sounds, for all you sound designers out there who like to make your own noise. There’s also a Synthesis page where you can tweak your sounds in even more interesting ways and save your own patches. There are also plenty of free patches you can find online.

A useful feature of the Zebra2 is its clever way of organizing the sound library: you can mark certain sounds you don’t like as “junk,” which will then be hidden from you, and you can mark others as favorites which will be given a yellow star next to their names. This way you don’t have to repeatedly cycle through the sounds you know you’re never going to use.

This one isn’t free either at $199, but there is a demo version available – although, after 2 minutes, it’ll start playing random notes along with what you’ve created.

A legendary standalone program and VST plugin coming from one of the most innovative music creation companies in the industry, Absynth has long been in a category all its own. It’s known for not only being a great tool for electronic music producers looking for more leftfield textures to work with, but also for being beneficial to sound designers, since it offers so much in the way of modifying sounds.

Absynth 5 comes with 200 new synth sounds and some interesting additions to its already solid repertoire, including a much easier way to search for sounds through descriptive keywords and a new effect called the Aetherizer that lets you make textures that range from metallic to liquid to just plain otherworldly. It has 2 new filters and a new Mutate feature that randomizes the parameters for any patch you want to use.

Its price is steep at $199, but this is a plugin you’ll be putting uncountable hours into.

This list should be enough to get you started on your search for new digital gadgets to tinker with. Here’s to making 2015 a productive year for all you producers out there!

Nexus 2 – An extremely powerful softsynth with excellent quality and all sorts of incredible sounds to choose from. It’s expensive at $250, but if producers like David Guetta and Swedish House Mafia can be trusted regarding plugins to get excited about, then you should get excited about the nexus vst.

TuneFish 4 – Another great freebie with plenty of great features, and it’s only 10KB in size!