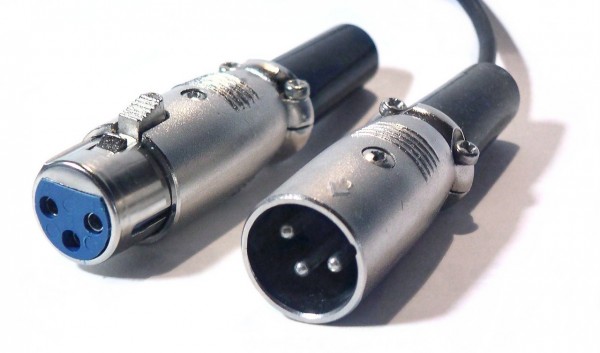 The XLR balanced line cable is an indispensable part of every engineer’s set of equipment. Despite that, far too many people use them without actually knowing why they’re so superior to a basic phone cable set, or why they aren’t susceptible to a low frequency hum like other cables. This article will explain exactly how XLR cables work. We’ll also give a brief overview, of the decades-old discussion of whether some XLR cables are better than others.

THE SCIENCE
To fully explain what makes a balanced line, let’s do a quick recap of High School physics. We know that sound travels in waves, and that we measure the frequency of those waves with Hertz (Hz). Higher frequencies mean higher pitched sounds, and lower frequencies mean lower pitched sounds. What you might not have been taught as a teenager (or just don’t remember), is that these waves can be canceled out.

Imagine a waveform of 60 Hz, meaning that the wave is rising to its highest point (called the crest) and falling down to its lowest point (the trough) 60 times in one second. Now imagine a second wave, also 60 Hz, but beginning just a few milliseconds after the first, so that every time the first wave is rising up to its crest, the second is falling down to its trough.

If these two sound waves are sent to the same source, such as a speaker, both waves turn out silent. The rising of one and the equal falling of another (called being out of phase) causes them to cancel each other out. We call this phase cancellation.

THE PROBLEM AND THE SOLUTION
Anyone who plays electric guitar has experienced an irritating hum coming through their amplifier. A lot of this hum is caused by the cable going from the guitar to the amplifier. It has to be near AC power sources and cables. Alternating current gives off a 60 Hz electrical signal, which leaks out and gets picked up by your cable. This doesn’t just happen with guitars, but with any unbalanced cable that is meant to carry electrical signals to be converted into sound.

In the early 1950s, somebody got a cool idea to use phase cancellation to subdue the pesky hum that would leak into the cables through local AC power sources. When an XLR cable receives a signal, let’s say your vocals, it splits it into two separate signals, running through two separate lines. These two lines are referred to as the “Hot” and “Cold” lines, or the “In Phase” and “Reverse Phase/Out of Phase” lines. As you might guess from the name, the phase is reversed on the cold line. When the signal reaches the other side of the cable, the signal with the reversed phase is reversed back  to normal again.

While the signal is passing through the cable, it’s picking up  any 60 Hz hum that comes in range, just like every other cable. The difference is that when it reaches its destination (such as a speaker or mixer input) the signal going through the cold line has its phase reversed, including the 60 Hz hum signal that invaded it. So the original signal from a microphone or direct box has been brought back to normal, before you even heard the difference, but the hum is cancelling itself out through phasing.

This makes balanced XLR cables superior to unbalanced cables by far. An unbalanced line, such as the one that goes from a guitar to an amplifier, can stretch only as far as about 20 ft. before major problems with the sound start happening. A balanced line can potentially be thousands of feet long, and sound the same as one plugged in right next to you.

THE DISCUSSION
Are some better than others? Do a quick Google search for “best XLR cables”, and prepare to be confused and conflicted. Some say that all XLR cables sound so similar that no one can tell the difference, if there is one. Others swear that their favorite brand always provides the clearest sound. There’s yet another group that will assert that the only way to get the best cables for your money is to solder them together yourself.

Thankfully, it is accepted that, even if they all sound the same coming out of the box, some are more durable and last longer than others. It should also be noted that even though, technically, every XLR male is the right shape and size to fit every XLR female, there are slight discrepancies in size, that will make some fit and stay plugged in better than others. We’re talking millimeters, here, so it’s not being said that you’re going to bring home a new cable from Guitar Center and find that it won’t plug into your equipment.