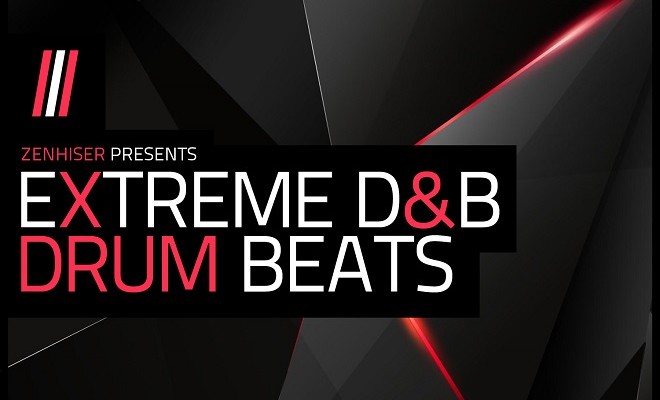 In an effort that will literally give you bang for your buck, Zenhiser has put together a massive library of neck-snapping, aggressive, vibrant loops with Extreme D&B Drum Beats, featuring around 100 drumkits with 4 variations each, equaling 400 individual loops. There’s so much to unpack and pick apart here, producers will have a field day going through them all and applying them to some new tracks!

The first thing I noticed is that there’s a good balance of complexity levels in this collection. There are some simple kick-hat-snare configurations that can serve as good foundations to build on, as well as singled-out snares so users can chop up the individual sounds to make their own creations, while there are others still that offer some creative counterpoint rhythms for the creation of busier, more complex grooves. Which is very helpful for producers just starting out, since it might take them a while to learn to craft those types of drum patterns on their own.

There are some neurofunk-style beats in here too, featuring those rich, chunky snares that make the genre so powerful, fully prepared to help producers churn out some real bangers. Throw one of these loops on and start jamming on your synth to make a deep, emotive riff, and you’re good to go!

I noticed a few raspy, dirty darkstep breaks as well – and as a sucker for Limewax, Panacea, Katharsys and Nanotek, I couldn’t help but nod my head to these. The only issue seemed to be that the mixes felt a little flat on these, like the snares didn’t pack quite the punch I hoped they would. Overall I did enjoy these, though. I even had one of them on loop for a solid 5 minutes. What can I say, I’m easy to please.

My only criticism is that there seem to be several loops that most producers might not have much use for. I noticed several where the hi-hats were a bit too loud in the mix, or had too much release, which deadened the punch of the kicks and snares. There were others that just felt uninteresting or uninspiring. I tend to gravitate towards loops that start to give me ideas for new tracks, loops that plant seeds in my mind and get me tending to the trees that grow from them. There are a bunch of them in here that do that – and of course, different loops will inspire each person in different ways – but I guess some of them just felt too simple to me, especially in comparison to a lot of the really good ones.

In the end, though, all loop packs will have a handful of simpler loops and others clearly designed to blow users away. And after listening to these loops a few times over, I’d say there’s a lot more of the latter for producers to dig into.

And the pack is only $35 Australian dollars, which is about $27 USD – an excellent deal for the amount of content they’re offering you!

So what are you waiting for? Head over to Zenhiser.com and check out this excellent loop pack, along with all the other great packs they offer!