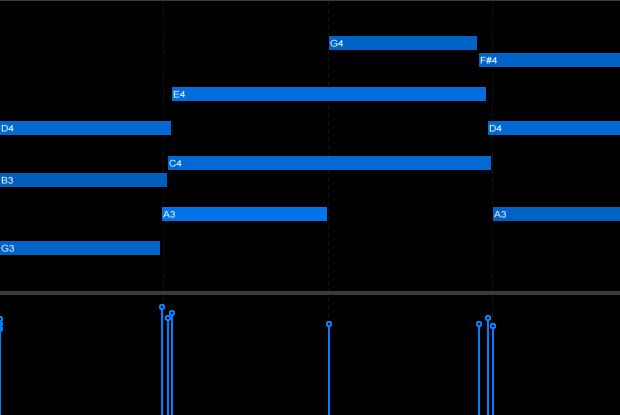 Programming pad synth and legato string chord progressions in a DAW can be challenging: perhaps more than any other elements of a track, these instruments benefit from having a natural, humanized sound that’s often difficult to achieve with a MIDI piano roll and a VST synth. Here are a few ways you can make your pad and string synth chord progressions sound more natural, flowing, and dynamic.

When a synth receives a MIDI note message, it restarts the sound’s volume envelope from the beginning. So, if your chord progression is moving from an A minor chord to a C major chord, the synth will play A, C, and E simultaneously, then stop, then play C, E, and G together. To make the transition between chords smoother and more flowing, extend notes across any two (or more) adjacent chords that have them in common. In the above example, assuming that each chord is one bar in length, you’d extend the C and the E across the two-bar span.

MIDI has perfect timing: notes start and stop exactly when you tell them to (latency aside). Even with a gentle volume envelope, this can make the transition between two chords sound more abrupt and switch-like than is ideal. To make chord transistions more natural-sounding, turn off the MIDI grid, then adjust the transition point between two notes so that it’s just off the beat. If the highest note in the first chord is a D, for example, and the highest note in the next chord is an E, you’d drag the end point of the D so that it extends about 1/32 note past the end of the bar, then drag the start point of the E to the same position. Use different amounts of variation for the transitions between the root, third, and fifth notes of the two chords.