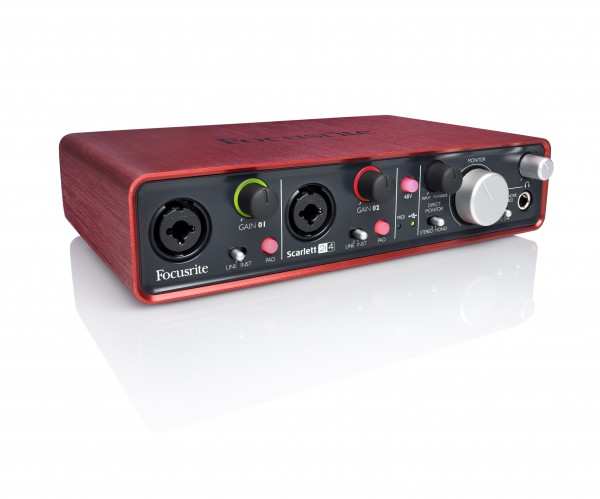 This is a review of the Scarlett 2i4 USB Audio Interface, currently retailing for about $200. An interface is necessary if you plan on recording vocals or instruments at home. Some beginning producers get around that by plugging their instruments into their computers through effects processors, or using USB microphones. Still, these people are just using an interface by a different name. The Scarlett 2i4 will give most home producers what they need to record vocals, record instruments, and interface with MIDI controllers.

The Scarlett has two Nuetrik XLR/TRS combo inputs, allowing you to plug either a balanced XLR cable or a 1/4 inch cable from an instrument such as an electric guitar. Both inputs have a preamp, that automatically sets its gain for a microphone if an XLR cable is plugged in, or sets itself for line/instrument level if a TRS is inserted. This interface also has 48V phantom power, so condenser microphones are usable and effective with this product. Both inputs have their own individual line/instrument switch and a -10 db pad switch.

This interface fixes the issue of delay between playing your instrument and hearing it when recording, with a direct monitor output. On the back of the interface are two unbalanced RCA monitor outputs, and two balanced outputs. In the front, there’s a headphone output with a volume control separate from the controls for the monitors. Through the direct monitors and the headphone output, you hear the sound as soon as you play it, making it simple to record along with other tracks already recorded in your software. Overdubbing is difficult, if not impossible when your interface has an issue with latency, so this a very nice feature to have.

No one enjoys messing with settings and files on their computer to get a piece of hardware or software to work properly. The Scarlett is very reliable, and simple to install and work with. No computer is perfect, and there have been occasional reports of issues with the drivers, especially on older operating systems like Windows XP or Vista. Thankfully, these reports are rare, and are offset by people raving about how easy it is to plug in, download the proper drivers, and get to making music. The interface connects to the computer with USB 2.o, making it much more accessible than a FireWire interface. It’s powered by the USB connection, and doesn’t have an AC wall plug, which is nice for a producer who is already swimming in a sea of cables. The USB cable isn’t hardwired, and is easily replaceable by a quick trip to Radioshack if it gets damaged.

The product does have its flaws, but they’re small and easy to overlook. The box doesn’t come with a real instruction booklet, except for a small quick start guide. To dig deeper into what the Scarlett can do for you, you’ll have to download the full instructions off of the Focusrite website. This won’t be an issue at first, but this product is designed to be marketed to be portable for the DJ or producer that has to travel with it. It’s more than likely that you won’t have a problem with the interface or have to look up how to use a feature. That is, not until you’re in some studio at the other side of your state with no internet access and without your personal computer. I would recommend printing out your own hard copy of the full instructions.

It comes packaged with a few bits and pieces of production software. There’s four VST effect plug-ins, the Novation Bass Station instrument plug-in, and Ableton Live Lite. The VST plug-ins aren’t bad, but they’re simple. There’s a gate, compressor, equalizer and reverb effect, all things that likely came with your own production software. If you don’t already have these, it’s nice that they included them. Ableton Live Lite does little more than look pretty on the box. It has the Ableton name, but it’s basically a demo, that only allows for 4 audio tracks, 4 MIDI tracks, and 4 VST effects at a time. The Scarlett also comes with 1 GB of samples from Loopmasters. None of these are actually in the box, and have to be downloaded with registration keys on cards.

All things considered, the Scarlett 2i4 is a nice little machine to have. At $200, it fits the budget and scope of the producer who’s done fooling around, and ready to start recording seriously, and it does that job adequately. The software is basic, but it’s optional, and doesn’t make the interface itself any worse. It’s reliable, and accessible to the person who doesn’t have a separate computer just for producing.

The Scarlett also comes as a 2i2, that retails at $150, but doesn’t have any MIDI connections. You’re basically paying $50 for the MIDI, which is your preference.