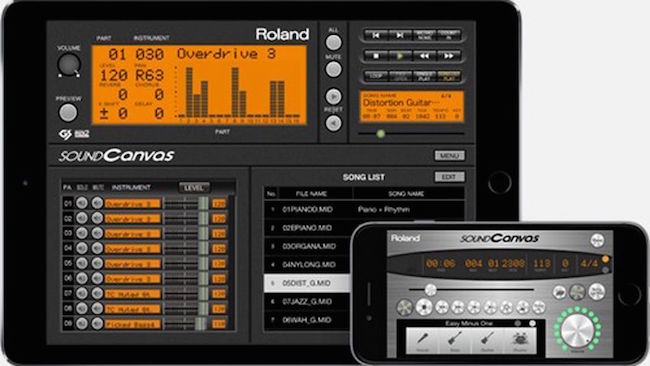 Roland have released an iOS version of their classic Sound Canvas module. It is available now for any iPhone or iPad running iOS 8.1 or above. The first Sound Canvas, the SC-55, was released in 1991 and they went on to produce numerous further models over the following ten years. You now have the possibility of turning your iPhone or iPad into a midi sound module, complete with 1600 sounds and 63 drum sets. The app is compatible with other music apps that support Core Midi, but unfortunately there is no Audiobus support as yet.

With many 90s sounds coming back into fashion, there will undoubtedly be some appetite for this app. It has MIDI data playback ability via its built in ‘SMF’ (standard midi file) player and you are also able to turn your iPhone or iPad into a sound module when you connect an optional MIDI interface (Roland recommend their own UM-1).

The 1600 sounds included are drawn from the four different sound maps compatible with the original Sound Canvas series. GM and GM2 tone maps are also supported. A number of built-in effects are included; Reverb, Chorus, Delay, 2-Band EQ, and 64 types of insertion effects. Unfortunately it is not possible to edit the parameters on the insertion effects however.

The built-in SMF player features a variety of playback options. These include key and tempo changes, a “Loop” mode for repeating a specific part of the song and “Song List Play” for continuous playback of various ‘songs’ in sequence.

Although, the app does look interesting and will appeal to those of us that like those old 90s sounds, it is possibly worth waiting a while before making the purchase. Users on the App Store are making complaints about inter-app compatibility at present; you would expect Roland to sort out these problems in time, but for now using the app could prove a little frustrating if you are planning on integrating it into a wider music-making setup.

Take a look at Sound Canvas for iOS in action below:

Sound Canvas for iOS is available now for $14.99. It is compatible with devices running iOS 8.1 and above.